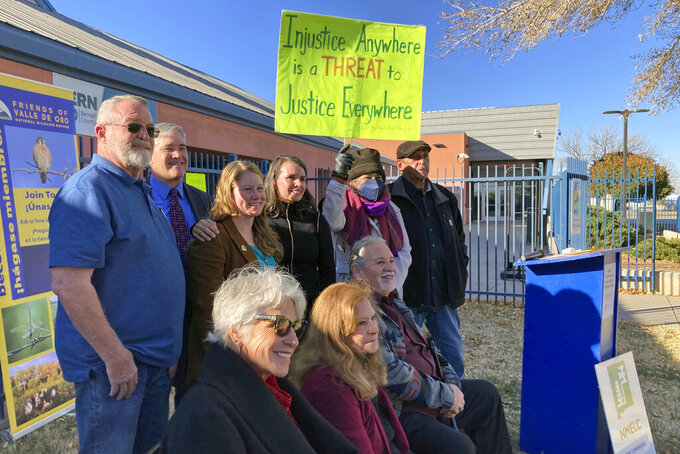 Susan Montoya Bryan, ASSOCIATED PRESS
Members of the Mountain View Neighborhood Association and their supporters pose Monday, Nov. 21, 2022, during a news conference in Albuquerque, N.M., as they introduced a new proposal aimed at limiting pollution in disadvantaged communities in New Mexico's largest metro area. It will be up to the Albuquerque Bernalillo County Air Quality Board whether to schedule a hearing to consider the measure. (AP Photo/Susan Montoya Bryan)

ALBUQUERQUE, N.M. (AP) — On the southern edge of New Mexico’s largest city is a Hispanic neighborhood that used to be made up of a patchwork of family farms and quiet streets, but industrial development has closed in over the decades, bringing with it pollution.

Neighbors point to regular plumes of smoke and the smell of chemicals wafting through the neighborhood at night, saying contamination has disproportionately affected the area when compared with more affluent neighborhoods in the Albuquerque area.

Now residents have come up with a proposal as they fight for environmental justice, and members of the Mountain View Neighborhood Association, supporters of the nearby Valle de Oro National Wildlife Refuge and others gathered Monday afternoon to roll it out and to request that Albuquerque and Bernalillo County regulators hold a hearing to consider the measure.

Modeled after regulations in New Jersey and Minnesota, the proposal calls for the region’s air quality board to consider a series of health, environmental and equity indicators before approving new permits. It also would establish a path for regular reviews to ensure compliance for businesses that are granted permits in already overburdened areas.

Eric Jantz, an attorney with the New Mexico Environmental Law Center, said the fight has been going on for generations.

“This piece of regulation represents a critical shift, a fundamental shift in how environmental health is viewed in Albuquerque and Bernalillo County,” he said, noting that pressure is growing in New Mexico and elsewhere for regulators to weigh human health as a determining factor for whether industry gets to do business in disadvantaged neighborhoods.

The issue of environmental justice has been resonating at the state and federal level as some politicians push for tighter regulations. President Joe Biden took office with an ambitious plan to help disadvantaged communities, but activists have been frustrated with the pace of progress.

The governor is fresh off a trip to Egypt for the United Nations’ climate conference, where she touted her environmental policies. Still, some environmentalists say the Democratic-led Legislature needs to do more to protect communities that have been overrun by industrial development.

Jantz said the proposal introduced by Mountain View residents could make New Mexico's population center a hub for innovation as companies would be required to find creative ways to do business without harming public health or the environment.

The city of Albuquerque's Environmental Health Department said Tuesday in a statement that its air quality program is committed to environmental justice and that officials look forward to reviewing the measure and working with the community.

Mountain View resident Magdalena Avila has been collecting data about instances of known contamination in her neighborhood and elsewhere in Albuquerque's South Valley.

“There's a long, long history,” she said. “And it's just essential that we develop community-based policy initiatives and this is what this is — it's coming up from the community in terms of what we need.”