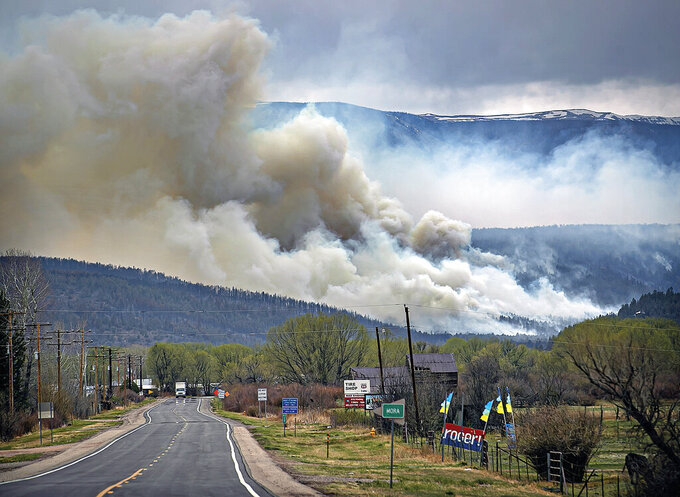 Jim Weber, ASSOCIATED PRESS
FILE - A flare up near Cleveland, just down 519 from Mora, N.M., darkens the sky on Wednesday, May 4, 2022, where firefighters have been battling the Hermit's Peak and Calf Canyon fire for weeks. New Mexico residents are suing the U.S. Forest Service for information on a massive wildfire that's been burning in the state since late April. The agency has been criticized for its role in causing two wildfires that merged to become the largest blaze in New Mexico history. (Jim Weber/Santa Fe New Mexican via AP, File)

ALBUQUERQUE, N.M. (AP) — U.S. President Joe Biden on Monday authorized an increase in funding for debris removal and other emergency measures being taken as a result of a historic wildfire season in New Mexico that stemmed partly from missteps by federal forest managers in starting a prescribed burn.

The additional funding comes through an amended disaster declaration signed by the president that calls for direct federal assistance to be increased to 100% of the total eligible costs for 90 days following the declaration.

The wildfire still smoldering in the Rocky Mountain foothills of northern New Mexico grew to become the largest in the U.S. this spring after it was sparked in April by two planned government burns meant to reduce wildfire danger.

The U.S. Forest Service acknowledged in a recent report that managers underestimated how dry things have become in the Southwest over the last two decades and that modeling and training needs to improve to account for the extreme conditions.

Thousands of residents were displaced by the blaze, hundreds of homes were destroyed and now officials are warning of post-fire flooding.

Burn scars in both New Mexico and neighboring Arizona have been hit over recent days with rain as the Southwest region marks a robust start to the monsoon season.

Scott Sterns, a meteorologist assigned to the big fire in New Mexico, said Monday that up to 3 inches (7.62 centimeters) of rain fell over the last three days on some parts of the fire — which spans more than 533 square miles (1380 square kilometers) of the Sangre de Cristo mountain range.

The potential for runoff is high now that the soils are saturated and the vegetation is moist, Sterns said.

“There's really not a whole lot more good we can do with more moisture at the moment,” he said during a briefing. “The nice thing is so far on the incident we've had fairly consistent long duration moisture and that's always good to keep the (relative humidity) higher, which really helps us out in terms of the fuel situation.”

There has been much criticism of the federal government in New Mexico for causing the largest wildfire, with some residents saying they have been left to wade through a bureaucratic maze as they look to be reimbursed for their losses.

Biden vowed during a visit earlier this month that the federal government would cover the full cost of the emergency response and debris removal, a responsibility that was previously shared with the state government.

According to the Federal Emergency Management Agency, more than $3.5 million in assistance for housing and other needs have been approved for residents so far.

The agency also is considering disaster requests for several other states from Minnesota to Tennessee because of wildfires, tornadoes and flooding since late April.

Scientists and government officials have warned of more severe weather as the world keeps getting hotter. In the United States, there were 20 weather or climate disasters last year with losses exceeding $1 billion a year, according to the National Oceanic and Atmospheric Administration.

In southwestern New Mexico, a half-inch of rain has fallen each day, stalling efforts to rehabilitate fire lines around a massive blaze that has burned through the rugged Black Range.

Parts of northern Arizona, where a series of wildfires burned homes and forced evacuations over recent months, saw flooding over the weekend as storms brought rain, hail and wind. The National Weather Service reported that some roads in the Flagstaff area were closed as creeks and washes filled up with storm runoff.