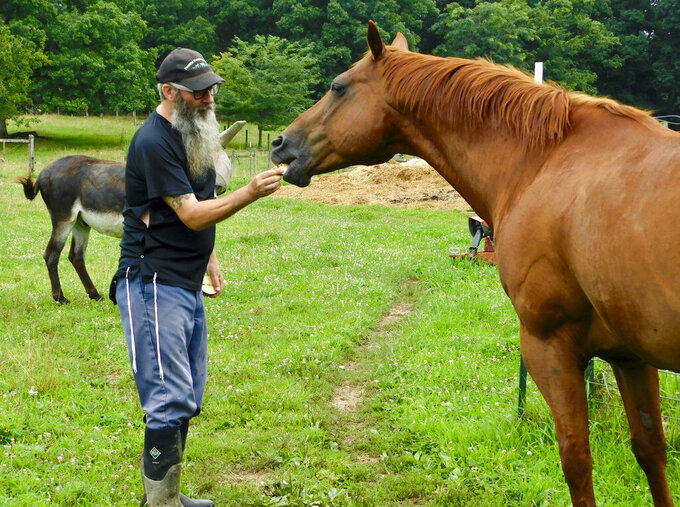 Brian Brehm, ASSOCIATED PRESS
John Netzel, founder and operator of Peaceful Fields Sanctuary in Frederick County, offers apple slices to Elvis the horse on Monday, July 18. Moving in for his own snack is Brownie the donkey. The nonprofit farm for rescued livestock will host an open house on Sunday afternoon. (Brian Brehm/The Winchester Star via AP)

WINCHESTER, Va. (AP) — Remember when you were a kid and your parents said your missing dog or cat had gone to live on a farm? Believe it or not, that farm actually exists — sort of.

Peaceful Fields Sanctuary is a nonprofit farm that takes in mistreated animals, nurses them back to health and gives them a loving home for the rest of their natural lives. Unlike the mythical farm your parents used to talk about, though, Peaceful Fields offers its happily-ever-afters to livestock, not dogs and cats.

John Netzel, founder and operator of the 13-acre animal sanctuary near Winchester, said one of the longest-term residents at Peaceful Fields is Brownie the donkey. Brownie is happy and content today, but his life before coming to the sanctuary eight years ago was horrific.

“He was rescued from the southern Shenandoah Valley,” Netzel said. “He was originally with a small group of horses in a small field, a small yard, and they were starving and denied water. Brownie was electrocuted on a regular basis ... with electric prods just to be cruel.”

Physically, Netzel said, Brownie has long since recovered. Emotionally, the scars remain but he has come a long way.

“He will trust a lot of people and you can interact with him,” Netzel said. “He’s a very sweet, kind, caring boy. He’s definitely one of my favorites.”

Brownie is among dozens of farm animals who never again have to worry about being abused and neglected. That’s because every living creature at Peaceful Fields will forevermore be pampered and loved by Netzel and his small crew of volunteers.

“None of us are paid” to care for the livestock, Netzel said, noting he typically works 10 to 12 hours a day, seven days a week. “But I love it. Can’t imagine doing anything else.”

Peaceful Fields Sanctuary is generally closed to the public, but it hosts three open houses per year so the community can tour the operation and meet the rescued cows, horses, donkeys, goats, chickens, turkeys and more that live there.

“It’s a chance for families to come out and spend some time around animals and have a great day,” Netzel said.

Apples are a particular favorite on the farm, especially with Toby the pygmy goat. (Yes, Netzel has named every one of the 70 animals at Peaceful Fields Sanctuary.)

As Toby contentedly nibbled on apple slices, Netzel explained the goat had “injured his front leg shortly after being born in the Virginia Beach area and the folks that owned him weren’t interested in providing any medical care. They were just going to snap his neck and kill him.”

Netzel stepped in before that could happen.

“He was almost dead when he got here,” Netzel said, because the compound fracture and open wound on his leg had gone untreated for several days.

Toby received emergency medical care and was stabilized. About a month later, he had regained enough strength for veterinarians from Virginia Tech to address his injured leg. In order for the goat to survive, though, the leg had to be amputated.

But that was the last bad day Toby will ever experience. Seven years after coming to Peaceful Fields, Netzel said, “He is a happy little boy, running around with the other pygmy goats. He’s super social so we take him to schools to visit with children, kids summer camps, lots of events. He’s kind of like our ambassador. Everybody loves our little three-legged goat.”