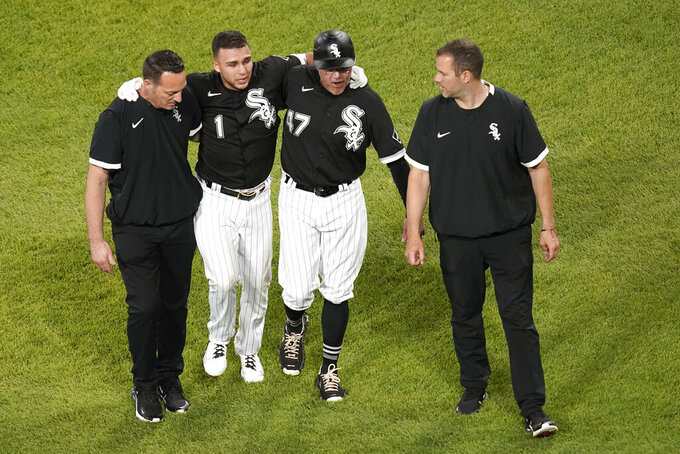 Charles Rex Arbogast, ASSOCIATED PRESS
Chicago White Sox's Nick Madrigal (1) favors his right foot as he is helped off the field by third base coach Joe McEwing (47) and members of the medical staff during the seventh inning of the team's baseball game against the Toronto Blue Jays on Wednesday, June 9, 2021, in Chicago. (AP Photo/Charles Rex Arbogast)

CHICAGO (AP) — White Sox second baseman Nick Madrigal will miss the rest of the season after undergoing surgery Tuesday to repair tears in his right hamstring.

The AL Central leaders, who have already overcome significant injuries this season, said Madrigal was expected to be fully recovered by next spring.

Madrigal was hurt last week trying to beat out a grounder. Chicago had put him on the 60-day injured list and held out hope he might recover to play again this year.

The 24-year-old rookie had been a sparkplug for the White Sox, hitting .305 while scoring 30 runs and driving in 21 over 54 games. He was tied for the AL lead with four triples.

“The surgery went well,” La Russa said. "To have the surgery, I think in the long term for him and for us, it clears away some uncertainty,' he said.

Danny Mendick, who started Tuesday night against Tampa Bay, and Leury García were expected to share second base in Madrigal's absence.

Slugging outfielder Eloy Jiménez hasn't played this season after rupturing his left pectoral tendon in spring training. He was cleared this week to resume baseball activities and the White Sox hope to have him in the lineup down the stretch.

Center fielder Luis Robert is out with torn right hip flexor and also could be back late in the season.