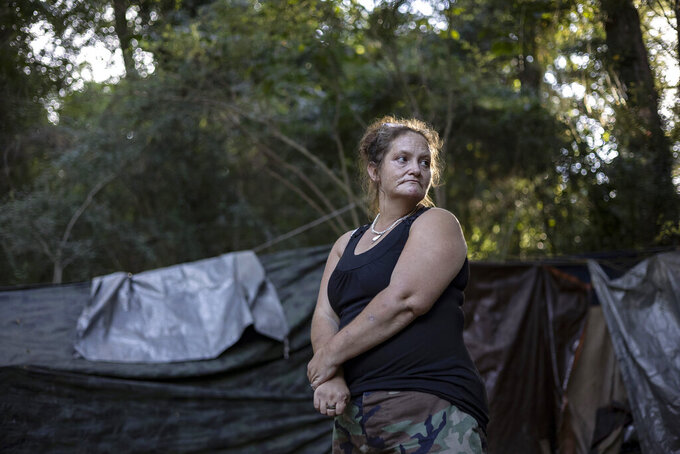 Kayla Renie, ASSOCIATED PRESS
Flora Harlow, who has been in and out of permanent housing over the past several years, poses near her tent on Thursday, Sept. 9, 2021, in Athens, Ga. Harlow and others live in a small encampment colloquially called "Cooterville," a wooded area under CSX's train tracks off Willow Street that is scheduled to be cleared by Nov. 12. (Kayla Renie/Athens Banner-Herald via AP)

Over the last several years she has been in and out of permanent housing, at times working while being homeless. Today she lives with others in a small encampment colloquially called “Cooterville” by some.

The tight-knit community nestled in the trees off of Willow Street and under CSX train tracks has evolved over the years, according to Harlow.

But the encampment is scheduled to be cleared by Nov. 12, and while a new, government-sanctioned encampment may be up and running shortly after, some still remain skeptical of its benefits. And many have yet to find a better alternative.

Harlow, who goes by Flo, said she’s sure some in the homeless community will choose to move into the sanctioned encampment.

“But for the people who kind of rely on this place it may not be good,” she said.

Cooterville has become a commune-like space for those who live there. When a person stops by to announce a church is giving out food and soft drinks at Bigger Vision, another camper reminds others they plan to cook dinner that night, and all were welcome to join.

As Harlow sits along a fallen tree, Tink, a camper’s dog, jumps up to join the conversation. Everyone is familiar with Tink, considering her as much as part of the extended family as any other camper.

Since its founding, Cooterville has grown to encompass a community that largely regulates itself. Harlow said around 8 or 9 people permanently live in the camp today, but numbers have grown to 15 at times.

“Before we let somebody move in we’ll all talk about it and either agree or disagree,” she said. “You can’t just come in and do whatever you want whenever you want.”

The encampment is also a space for those who may not permanently live there, but have created close ties with those who do. And people who have gone on to move into apartments sometimes return to see everyone, according to Harlow.

One iron-clad rule is that those who are caught stealing are promptly kicked out of the camp, she said. They also ban those who fight because it draws attention.

While the encampment is called Cooterville by some, Harlow said the real Cooterville was actually further up the hill away from the main road. The man who originally built it over a decade ago was called Cooter and infamously had raccoons for pets, she said.

The encampment was eventually pushed further down the hill due to some campers stealing on CSX property, Harlow said. Since being pushed closer to the road the encampment has drawn more attention, and not all of it has been good.

A spokesperson for CSX Transportation said the company had received multiple complaints about the camp from local landowners. A deadline of Sept. 5 was originally imposed for the campers to move by but it was pushed back to November.

The delay came after city police notified CSX a government-sanctioned encampment was in the works that could provide an alternative, according to City Manager Blaine Williams.

“My understanding, I wasn’t part of the conversations, is that CSX agreed to extend that time to try and bridge it closer to when the sanctioned homeless encampment will be up and running,” he said.

The city currently is looking for an organization to head the encampment, which will determine what it eventually looks like. But Williams said CSX has been collaborating with police and local officials to accommodate the campers on the property.

“By their right, they could have the police remove them,” he said. “So I want to give credit to CSX for trying to work with the community on this.”

In Cooterville many have questions about what this encampment will look like and who will be involved. Some have expressed feeling left in the dark about the entirety of the process, not entirely sure if they will even be secured a spot in the camp.

The campers each have their own personal journeys that led to Cooterville. And for some, they said their time out there has led to skepticism when it comes to receiving help.

For Harlow, the journey to Athens came after she moved in and started taking care of her mother who had Alzheimer’s and dementia several years ago. When her mother died she found out her stepfather took out additional mortgages on the home, which was eventually foreclosed.

Out on the streets, she met her uncle who already had experience living homeless in Athens.

“He was the one who taught me how to hustle out here,” Harlow said. “He passed away a couple of months after my mom. I went from staying with her and taking care of her, to coming out here and him trying to teach me how to be homeless.”

Over a year ago she worked at a Family Dollar near the encampment. Harlow said a manager for the store was willing to work with her because she worked hard, but when he eventually left the store a new manager pushed her out upon finding out her living situation.

“Her first sentence she said to me was, ‘In Madison county homeless people don’t even come in my parking lot,’” she recalled. “I was fired within a week.”

After the encampment was moved closer to the road earlier in the year, campers said people started dumping their garbage on them.

“We have people who come by in cars and put their trash at the foot of our camp,” Harlow said. “They’ll just stop and drop stuff... I mean just trash, and it makes us look bad.”

Barrett Smith, who doesn’t live in the encampment but often spends time there, shared similar sentiments.

“People dump their trash on us under the guise of donations,” he said. “The streets get littered, but I try to come out here on the weekends and clean up some of the litter.”

Smith bartended around Athens for a decade working at places like Manhattan Cafe and Flicker Theatre & Bar. But when the pandemic struck he was left without a job and soon fell behind on rent.

After bouncing around the southeast he arrived back in Athens in April. He said since returning he’s seen the homeless population explode.

“Before COVID you didn’t see tents like this,” he said.

Smith said while he wasn’t keen on the idea of the government-sanctioned encampment, it was a move in the right direction. But many dealing with trauma may choose to take to the streets because it’s an easier way to live, he said.

“With a life of abuse it’s kind of easier to navigate this area,” Smith said.

However, Smith, and others, all shared that there are real dangers with being homeless, especially at night.

“It’s shocking some of the things that go on,” he said.

And when the body of a woman known to those in the camp was found in North Oconee River, rumors began to spread about what could have happened. It highlighted the real danger that comes with living without permanent housing.

Harlow said there are serious attacks on women and men that often go unreported. But despite the danger, for some the sense of community provided by the encampment has been a help.

Around the encampment, Harlow is known as something like a mother figure. Ensuring people take their medication while trying to maintain a stable living environment. She’s often assisted by Kat Ryan-Butts, a camper who’s been in Cooterville since 2019.

“Me and Flo are like the queens,” Ryan-Butts said. “I call us the queens because everybody comes to us to fix problems.”

As the deadline approaches many are trying to figure what this will mean for them.

Oscar Sutton, who has lived in Cooterville for a couple of months, said he had no plans to move to the government-sanctioned encampment. He said he was worried about placing so many random people from the homeless community together.

Upon finding his tent and belongings in it burned down one day, he migrated to Cooterville where a friend already lived.

“The only place I knew I could come and set up something was next to him,” Sutton said.

He said people generally got along in Cooterville, and while he understood people had to leave the property he’ll choose his own solution.

Sutton said he’s since applied to work at the chicken plant in the city and is hopeful he can land the job before the deadline.

“If I get there my whole situation is going to change,” he said. “I’m going back to an apartment.”

With uncertainty on who is running the camp, what it will look like, or if they will even get in, others are similarly looking for alternatives.

Harlow currently has no plans to move to the government-sanctioned encampment, but she said she was thankful the deadline was pushed back. Days before Sept. 5 her partner, Robbie Pierce, suffered a ruptured ulcer and was placed in the hospital.

She said she was thankful for the additional time because without Pierce she was worried about having to secure and move their belongings alone.

Pierce has since recovered and is looking for a new living space alongside Harlow. He said they’ve even been in talks to possibly live on the property of an associate they know, where they won’t face an immediate threat of being removed.

“Me and Flo, we’ll be alright,” Pierce said. “Some of the other ones though I just don’t know.”