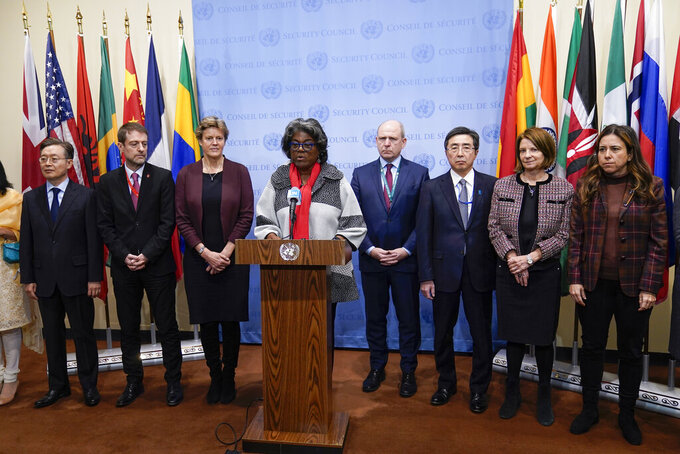 Seth Wenig, ASSOCIATED PRESS
United States Ambassador to the United Nations Linda Thomas-Greenfield, center, makes a statement on behalf of other member states regarding North Korea after a Security Council meeting at U.N. headquarters, Monday, Nov. 21, 2022. The meeting was called to discuss recent North Korean missile launches. North Korean leader Kim Jong Un says the test of a newly developed intercontinental ballistic missile confirmed that he has another "reliable and maximum-capacity" weapon to contain any outside threats. (AP Photo/Seth Wenig)

UNITED NATIONS (AP) — The United States and its allies on Monday strongly condemned North Korea’s latest intercontinental ballistic missile test and called for action to limit its nuclear and missile programs, but Russia and China opposed any new pressure and sanctions on Pyongyang.

U.S. Ambassador Linda Thomas-Greenfield told an emergency meeting of the U.N. Security Council that the Biden administration will be circulating a proposed presidential statement, which would condemn North Korea “for all its unlawful ballistic missile launches and other dangerous and destabilizing activity," as well as call for Pyongyang to abide by U.N. sanctions banning all ballistic missile and nuclear tests.

Presidential statements -- a step below a legally binding council resolution — require agreement from all 15 council members to be adopted, and the comments by Russia and China on Monday indicated resistance to any condemnation of North Korea’s action.

She pointed to a dramatic increase in military exercises by the U.S., South Korea and Japan, including a U.S.-South Korean navy exercise for missile defense systems involving destroyers on the eve of North Korea’s Nov. 17 ICBM launch, recent exercises using strategic bombers and a practice strike on the North’s ballistic missile installations.

Evstigneeva said such military measures and possible new sanctions threaten to create further tensions on the Korean Peninsula, “which can lead to unpredictable and dangerous consequences for the entire northeast Asia region.”

What the Security Council should do, she said, is “support inter-Korean dialogue and multilateral negotiations rather than becoming an impediment to them.”

China’s U.N. Ambassador Zhang Jun called for efforts “to cool down the situation,” restart dialogue “and try to meet each other halfway to prevent the situation from repeated escalation or even getting out of control.”

Zhang said the Security Council “should play a constructive role on this issue and should not always condemn or exert pressure” on the Democratic People's Republic of Korea or DPRK, the country's official name.

The council should "promote the deescalation of the situation at an early date so as to leave room for diplomatic efforts rather than create obstacles for this,” the Chinese envoy said.

During the meeting there were many calls for condemnation of the Nov. 17 launch, reportedly the first successful test of the North’s new Hwasong-17 missile, capable of reaching North America. And U.N. political chief Rosemary DiCarlo reiterated Secretary-General Antonio Guterres’ strong condemnation of the launch as a “blatant violation” of U.N. sanctions.

After the meeting, U.S. Ambassador Thomas-Greenfield read a statement on behalf of eight council members -- Albania, France, Ireland, India, Norway, United Arab Emirates, the U.K. and U.S. -- as well as South Korea, Japan and four countries joining the council in January. It supported condemnation of the ICBM launch and action to limit North Korea’s advancement of weapons of mass destruction and ballistic missiles.

“We invite all member states to join us in condemning the DPRK’s unlawful ballistic missile launches and call for full implementation of the existing Security Council resolutions,” the statement said.

“We remain committed to diplomacy,” it said, “and to that end, encourage the DPRK to halt its threatening behavior in violation of multiple Security Council resolutions, and to engage in meaningful dialogue toward denuclearization.”

The Security Council imposed sanctions after North Korea’s first nuclear test explosion in 2006 and tightened them over the years, seeking to rein in its nuclear and ballistic missile programs and cut off funding. In May, however, China and Russia blocked a Security Council resolution that would have toughened sanctions over its missile launches, in the first serious rift on the council over the sanctions against North Korea.

Thomas-Greenfield, in her speech to the council, said the Nov. 17 launch was the DPRK’s eighth ICBM test this year, “part of an unprecedented 63 ballistic missiles” fired so far this year, which is more than 2 ½ times its previous record of 25. Yet, she said, this was the 10th meeting of the Security Council where no action was taken, and she blamed veto-wielding Russia and China.

“We are prepared to meet without preconditions, and I call on the DPRK to engage in serious and sustained diplomacy,” Thomas-Greenfield said. “But the DPRK continues to not respond and instead chooses to continue this reckless behavior. The council must instead respond.”

South Korea’s U.N. Ambassador Joonkook Hwang the presidential statement is “the minimum action expected by the international community” from the Security Council in response to the DPRK’s actions — including saying the new ICBM could serve for a “preemptive nuclear strike.”

Responding to Russia, Hwang reiterated that South Korea’s longstanding joint military exercises with the U.S. are defensive, “and can never be an excuse for the DPRK’s illicit nuclear and missile development.”

Japan’s U.N. Ambassador Ishikane Kimihiro told the council that in the last two months, one DPRK missile flew over Japan for the first time in five years and the Nov. 17 launch “impacted in the Japanese exclusive economic zone, just 200 kilometers from Hokkaido.”

Ishikane called this an “unacceptable and unlawful” escalation, saying calculations indicate that the new missile, with a nuclear warhead, could hit all of Asia, Europe, North America and Africa and part of South America.

“It is outrageous to allow North Korea to take hostage the entire international community,” he said.