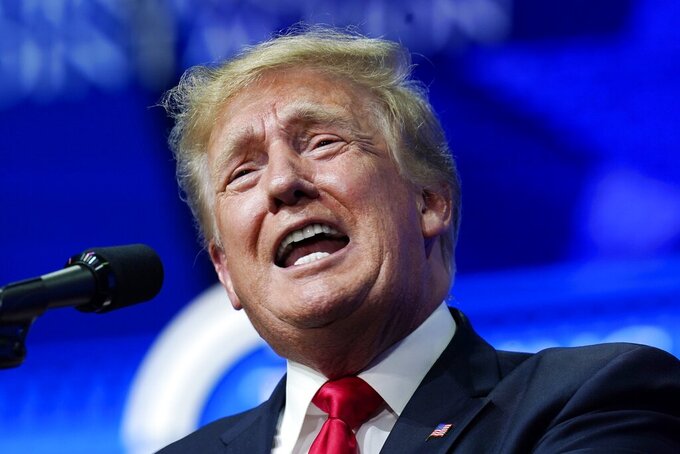 PHOENIX (AP) — In mid-May, partisan investigators hired by Arizona state lawmakers backed off their allegation that the state's most populous county had destroyed its 2020 election database. Confronted with proof that the data still existed, they admitted everything was there.

Two months later, the tale lives on. At an event Saturday, former President Donald Trump presented the debunked allegation as a key piece of evidence that the state's electoral votes were stolen from him in 2020.

It was one of a number of fabricated and familiar stories Trump told the crowd in his relentless effort to deny the well-established legitimacy of his defeat at the hands of President Joe Biden.

Over nearly two hours, Trump revisited his touchstones of grievance, leveling allegations of fraud that election officials and judges have systematically refuted or brushed aside. It was Trump’s most explicit effort to insert himself into the widely discredited Arizona audit as he tries to increase the pressure on other states to embark on similar efforts.

He spoke of untold thousands of dead people voting — no such phenomenon surfaced in postelection audits. He alleged 168,000 Arizona ballots were fraudulent — there is no support for that.

A look at his remarks in Phoenix:

TRUMP: “Unbelievably, the auditors have testified that the master database for the election management system, I’m sorry to tell you, has been deleted.... Meaning the main database for all of the election-related data in Maricopa for 2020 has been illegally erased. It’s been erased.”

THE FACTS: Wholly false. The database was never deleted.

At first, auditors hired by Republican state senators sympathetic to Trump reported that a database directory was deleted from an election management server. The official Twitter account tied to the audit said the deletion amounted to “spoliation of evidence.”

The Republican-dominated Maricopa County Board of Supervisors responded by calling the auditors incompetent and threatening to file a defamation lawsuit. Board Chairman Jack Sellers said the auditors “can’t find the files because they don’t know what they’re doing.” Maricopa County Recorder Stephen Richer, a Republican who took over the elections office after defeating a Democrat, called the allegation “unhinged."

The next day, Ben Cotton, founder of a digital forensics firm working on the audit, confirmed he had recovered all of the files. “I have the information I need,” he acknowledged, and the auditors deleted their tweet.

TRUMP: “There were 18,000 people who voted in Arizona in 2020 who were then purged from the rolls immediately after the election.”

THE FACTS: This didn't happen. His insinuation that people were stricken from the rolls because they voted for him is baseless.

Actually, 13,320 voters were removed from the rolls in the two months after the election, not 18,000 right away, and there were routine reasons why.

Voting rolls are updated constantly as people move, die, get convicted of felonies or have their voting rights revoked because of incapacitation. Trump was repeating a claim made by Doug Logan, CEO of Cyber Ninjas, the inexperienced firm leading the state Senate Republicans’ audit of the 2020 election.

Maricopa County officials said their analysis of the data shows 7,916 voters were removed from the rolls because they moved out of the county or died between Nov. 3, which was Election Day, and Jan. 2. An additional 5,404 people were removed for other reasons, including felony convictions, incapacitation or the voters' own request to cancel their registration.

The county has about 2.6 million registered voters.

Overall, Biden won Arizona by 10,457 votes out of 3.4 million cast. That's vastly more than the number of votes where fraud is truly suspected.

County election officials only identified 182 cases where voting problems were clear enough that they referred them to investigators for further review, according to an Associated Press investigation. So far, only four cases have led to charges. No one has been convicted. No person’s vote was found to have been counted twice.