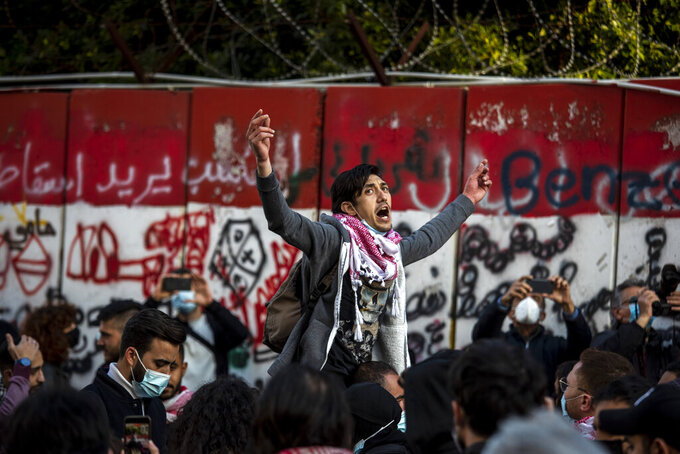 Hassan Ammar, ASSOCIATED PRESS
An anti-government protester shouts slogans during a protest against the rising prices and worsening economic and financial conditions, in Beirut, Lebanon, Friday, March 12, 2021. Lebanonâ€™s parliament on Friday approved a $246 million loan from the World Bank that would provide cash assistance for more than 160,000 families in the small country hit by an unprecedented economic crisis and the coronavirus pandemic. (AP Photo/Hassan Ammar)

BEIRUT (AP) — Lebanon’s prime minister-designate said Thursday that a government that could restart talks with the International Monetary Fund would be the main way to halt the country’s rapid economic collapse, adding there was still opportunity to form such a Cabinet.

Saad Hariri spoke a day after trading barbs with President Michel Aoun over who is to blame for the five-month delay in forming the Cabinet, while the country unravels. The economic and financial crisis roiling Lebanon is the gravest threat to its stability since the 15-year civil war ended in 1990.

Hariri was tasked by Aoun to form a Cabinet in October after he was named by a majority of lawmakers.

He held an hour-long meeting with the president on Thursday, a day after Aoun urged him to form a government immediately or step aside. Hariri in turn challenged the president to step down, saying Aoun had rejected multiple proposals over the past five months.

On Thursday, Hariri said there was still an opportunity for a government to be formed and said he would meet again with Aoun on Monday. He said a government is necessary to restart talks with the IMF to restructure Lebanon’s debts and to restore confidence of the world community. Talks with the IMF last year failed to reach a deal.

Later on Thursday, the leader of Lebanon’s Hezbollah group said forming a government is only the first step in a long and arduous road to salvation. Hassan Nasrallah also said a government of experts, with no political party representation as preferred by Hariri and recommended by France, would not be able to take the hard decisions needed to salvage the economy.

“Such a ball of fire, if you take it all alone, would finish you and the country,” Nasrallah said addressing Hariri. “This is a big ball of fire.”

“Form a political government and let these (political forces) come with their bare faces, take responsibility for the crisis the country is in and cooperate in dealing with it,” he said addressing Hariri.

French President Emanuel Macron said a new approach was needed to deal with the Lebanese crisis. Macron, who visited the country — a former French protectorate — twice last year, has been pushing Lebanese politicians to break the stalemate over forming a government.

“We will have to, in the coming weeks ... change the approach, the methods,” he said Thursday, without elaborating. “We must do everything to avoid the collapse of the country and therefore accelerate the formation of a new government and the needed reforms.”

Lebanon’s local currency has been in a free fall since late 2019, losing over 90% of its value. The government defaulted on its foreign debt last year and nearly half the population has been pushed into poverty and unemployment.

Prices of basic goods have increased and inflation has soared. Banks have imposed informal controls on people’s savings, and the Central Bank’s foreign reserves have shrunk in a country dependent on imports.

The outgoing government resigned last August, following a massive explosion at Beirut’s port that killed 211 people, wounded more than 6,000 and damaged entire neighborhoods in the capital.