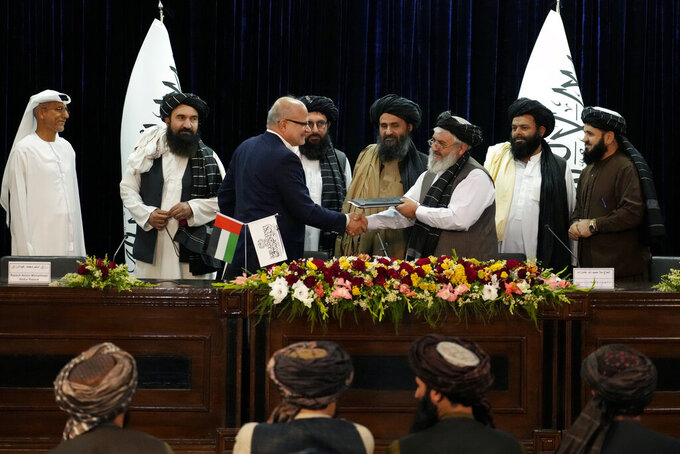 ISLAMABAD (AP) — The Taliban announced a deal Tuesday allowing an Emirati company to manage three airports in Afghanistan after the fall of the country's U.S.-backed government. However, the United Arab Emirates did not immediately acknowledge the deal.

Under the deal, the Abu Dhabi-based firm GAAC Solutions would manage the airports in Herat, Kabul and Kandahar, the Taliban said. They held a news conference in Kabul in which they signed the deal with an individual they identified as a managing director for GAAC.

Ghulam Jelani Wafa, the Taliban’s acting deputy transportation and civil aviation minister, signed the accord. Also on hand was Mullah Abdul Ghani Baradar, the Taliban-appointed deputy prime minister, who described the arrangement as renewing an airport ground-handling agreement with the UAE, a federation of seven sheikhdoms home to the long-haul carriers Emirates and Etihad Airways.

However, the deal left more questions than answers, particularly as Qatar and Turkey had been in line to run the airports, though the deal apparently broke down over requirements on having their own security personnel on hand at the airports.

The Gulf Arab nation already has agreed to represent the United States in Taliban-run Afghanistan following the closure of the American Embassy in Kabul and withdrawal of all U.S. forces from the country in late August. Meanwhile, Qatar Airways had been running flights to evacuate American citizens out of Afghanistan since the takeover.

The Taliban did not discuss the deal's terms with the UAE, which has had strained relations with both Turkey and Qatar in recent years, though tensions have recently eased.

Baradar had traveled to Abu Dhabi recently to offer condolences for the death of its president and speak with its new leader, Sheikh Mohammed bin Zayed Al Nahyan, according to Afghanistan's state-run Bakhtar News Agency. However, the UAE never acknowledged his visit.

The Emirati Foreign Ministry did not immediately respond to a request for comment. GAAC Solutions had described itself on a one-page website as an Abu Dhabi-based joint venture whose partners include the firm G42. Officials at G42 have refused to identify who owns the company, though many suspect it links back to Abu Dhabi’s ruling family.

Hours after the announcement, G42 told The Associated Press in a statement that it “had withdrawn from the GAAC consortium and halted its operations with immediate effect” on Aug. 15, 2021. That was the day the Taliban entered Kabul and civil aviation authorities warned they no longer controlled the country's airspace.

“We have since had no operational involvement in Afghanistan,” G42 said. It declined to explain why the GAAC website, which later became inaccessible Tuesday night, had listed G42 publicly as a partner.

GAAC did not respond to emails seeking comment. The Emirates’ state-run WAM news agency also did not acknowledge the deal, though the UAE was one of the few nations that allowed the Taliban to operate diplomatic posts in their nation during their earlier rule.

GAAC reportedly signed a $47 million service contract in 2020 to run airports in Afghanistan, including ground handling, information technology and security.

During the ceremony, Baradar said the Taliban wanted good relations with all countries and called on investors to come and invest in Afghanistan. He insisted the Taliban government would provide facilities and security for them.

“After a while in which the negotiations were ongoing regarding the aviation agreement, thank God it has reached to a conclusion and the agreement has been done," Baradar said.

However, the Taliban have faced withering international criticism of their rule since seizing the country by force last August amid the American and NATO troop withdrawal from Afghanistan. They have refused to reopen schools for girls above the sixth grade, despite earlier promises. Last week they ordered women working on television to cover their faces.

“The agreement, if true, may enhance perceived stability at Afghanistan’s airports and attract some airlines and investment to the country, but Afghanistan’s insecurity and the Taliban’s hardline domestic policies will likely continue to constrain interest,” the risk consultancy RANE said in an analysis.