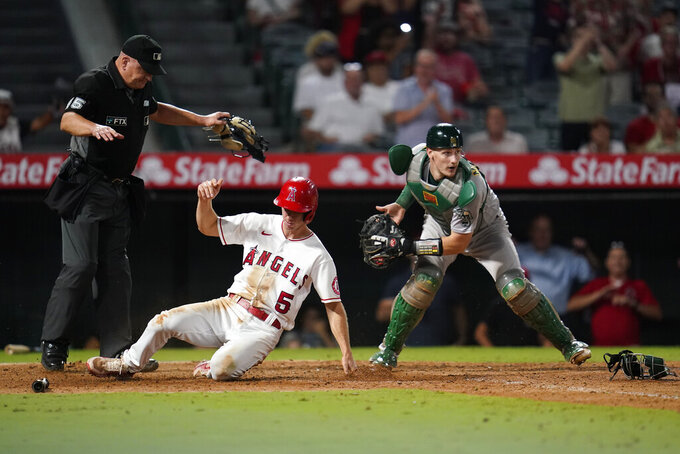 ANAHEIM, Calif. (AP) — Jo Adell drove in Matt Duffy with a tiebreaking RBI single in the eighth inning, Shohei Ohtani extended his hitting streak to a career-best 12 games, and the Los Angeles Angels opened their final homestand of the season with a 4-3 victory over the Oakland Athletics on Tuesday night.

A.J. Puk (3-3) hit Duffy with an 0-2 slider before pinch-hitter Michael Stefanic bunted Duffy to second, and Adell lined a single to left for just his third RBI in a quiet September. Adell was playing for the first time in five days after sitting behind Mickey Moniak in their outfield platoon.

“It’s been tough, but we’re all here working and we’re all getting better,” Adell said. “Opportunities like tonight are what you wait around for.”

Adell also made an impressive leaping grab at the wall in the fifth to take a hit away from Dermis Garcia. Interim manager Phil Nevin has attempted to keep Adell focused on his off-the-field work no matter how much he's playing, and the Angels are seeing improvements in Adell's previously sketchy defense.

“There's a lot of things that are paying off,” Nevin said. “His first step, his quickness, they're all getting better.”

Ohtani doubled in the first inning and singled in the third as the Angels opened their final week at the Big A in their franchise record-tying seventh consecutive losing season and their eighth consecutive non-playoff season. Duffy, Ohtani, impressive rookie Livan Soto and Taylor Ward all had two-hit games.

Ryan Tepera (5-3) pitched the eighth for the Angels, and Jimmy Herget earned his seventh save. Los Angeles' third victory in four games means this team (68-86) won't match the franchise record of 95 defeats.

Nick Allen had a two-run double for the last-place A's, who opened their last trip of the season with their AL-worst 98th loss.

Patrick Sandoval yielded three runs on six hits over 5 1/3 mostly solid innings for the Angels, going at least five innings in the 10th consecutive start of his hard-luck season. The left-hander remained 6-9 despite his tidy 3.09 ERA — just 2.30 over his last 10 starts.

“Just fighting myself the whole game,” Sandoval said. “Have to be better in the zone with my stuff. I want to pitch deep into games, and deep into the season, too.”

James Kaprielian gave up three runs on 10 hits over six innings for the A’s. The Orange County native and UCLA product repeatedly escaped trouble in his final four innings.

Cristian Pache drove in Oakland's first run with a tapper to third in the second inning. Allen followed with a two-run double off the wall for his first multi-RBI hit since June 26.

The Angels replied with three runs of their own in the second. Mike Ford doubled and scored on Matt Thaiss' single, and Soto's flyout drove in another run before Thaiss scored on Luis Rengifo's single.

Catcher Logan O'Hoppe, the Angels' top prospect, will make his major league debut Wednesday night, Nevin announced after the game. Los Angeles acquired O'Hoppe from Philadelphia this summer in a trade for Brandon Marsh, and the Long Island native had a strong finish to the season with Double-A Rocket City before joining the Angels' taxi squad Tuesday.

“It's been a whirlwind, and it just adds to the past few days,” O'Hoppe said before texting his family about the news. “It's a dream I've had for as long as I can remember.”

Angels: Anthony Rendon faced live pitching. He had purportedly season-ending wrist surgery in June, but the $245 million third baseman is trying to get healthy enough to at least serve his five-game suspension from his role in the Angels' brawl with the Mariners on June 26. ... RHP Archie Bradley came off the injured list after breaking his elbow while falling off the dugout railing during the Mariners brawl.

Michael Lorenzen (7-6, 4.78 ERA) continues his inconsistent attempt to prove he's a major league starter when he takes the mound for the Angels against rookie Adrián Martínez (4-5, 6.10).