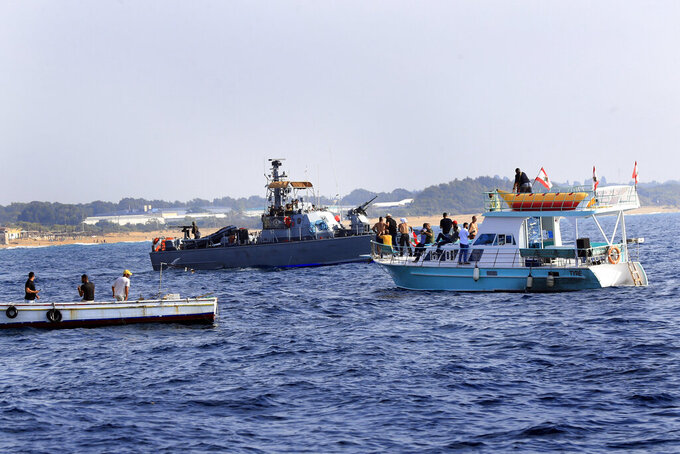 BEIRUT (AP) — Lebanese protesters on Sunday sailed down the country’s coast in dozens of fishing boats and yachts toward Israel, days before a U.S. envoy is expected in Beirut to continue mediating in a maritime border dispute between the two countries.

Lebanon and Israel, which have been officially at war since the latter's creation in 1948, both claim an area of some 860 square kilometers (330 square miles) of the Mediterranean Sea. Lebanon hopes to exploit offshore gas reserves as it grapples with the worst economic crisis in its modern history. Lebanon and Israel kicked off maritime border talks almost two years ago.

Sunday's flotilla carried Lebanese flags and banners, with slogans in Arabic, French, and Hebrew expressing what they say is Lebanon’s right to its maritime oil and gas fields.

“We are demanding our right to every inch of our waters,” Aya Saleh, one of the protesters on a fishing boat, told The Associated Press. “And we are sending a message from the Lebanese people.”

Lebanese and Israel navy vessels were present, though no tensions occurred.

Amos Hochstein, a senior adviser for energy security at the U.S. State Department, has shuttled between Beirut and Jerusalem to mediate the talks. He was last in Beirut in late July, when he informed Lebanese officials of Israel's response to a proposal Lebanon made in June, and signaled optimism after his trip.

According to Lebanese President Michel Aoun’s office, Hochstein notified adviser and deputy parliament speaker, Elias Bou Saab, that he will visit Beirut later this coming week. Lebanese media have speculated that both countries could soon reach an agreement.

The Israeli military in early July shot down three Hezbollah unarmed drones flying over the disputed Karish gas field in the Mediterranean.

Lebanese caretaker Prime Minister Najib Mikati criticized Hezbollah, saying the move could pose risks to the country. Hezbollah leader Hassan Nasrallah in an interview that month said the militant group can locate and strike Karish and any other Israeli gas field.