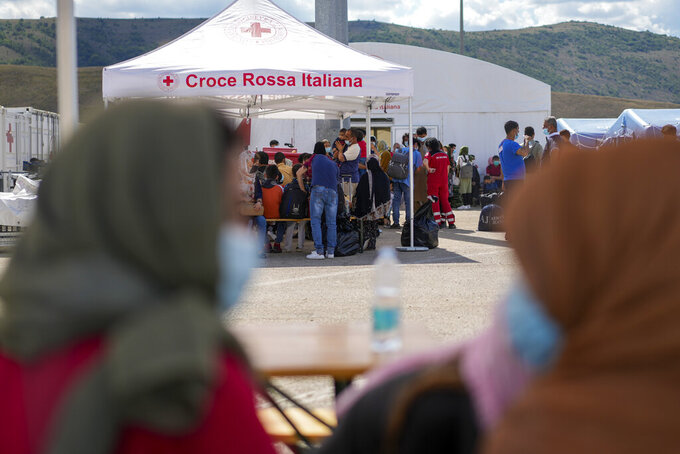 Andrew Medichini, ASSOCIATED PRESS
Afghan refugees in an Italian Red Cross refugee camp, in Avezzano, Italy, Tuesday, Aug. 31, 2021. This quarantine camp in Abruzzo, central Italy, where 1,250 migrants are hosted, is expected to close in a week as the quarantine expires and they are moved to other structures to apply for asylum. (AP Photo/Andrew Medichini)

AVEZZANO, Italy (AP) — A 39-year-old man who served as a translator for the Italian military and embassy in Afghanistan says he is relieved to be safe in Italy but worries about his wife and four young children back in Kabul.

He said before he left the Afghan capital, he saw Taliban fighters marking an X on the homes of people like him who had worked with Western forces during their 20-year war in Afghanistan.

“They would come back the next day and either bring him to jail or kill him,’’ the refugee told The Associated Press. He asked to have his identity and image withheld for the safety of him and his family.

He is one of 4,890 Afghan citizens brought to Italy after the Taliban claimed control of Kabul and Western nations launched an extraordinary airlift on Aug. 15 to evacuate citizens and local allies before the last U.S. troops pulled out by Tuesday's deadline. Italian Foreign Minister Luigi Di Maio says Italy is housing the most evacuated Afghans of any European Union nation.

The man who worked as a translator for Italy was observing a 10-day COVID-19 quarantine at a tent camp set up within 48 hours in the Apennine mountains of central Abruzzo as a way station for more than 1,300 new arrivals. They also will get vaccinated at the camp and from there transfer to other locations to pursue formal requests for refugee status.

The camp, run jointly by Italy’s Civil Protection Agency and the Red Cross, is to close on Friday. On Tuesday, The Associated Press saw some boys there playing soccer and girls with playing with dolls.

The one-time military and embassy translator can’t help thinking of his three daughters, ages 10, 7 and 3, his 2-year-old son and how his wife is getting by without him. There was no hope of getting them out in the chaos last week in Kabul, he said.

“I am sad and worried for that. I am the head of the family and the only person in the family that worked,’’ he said. “They don’t have a place to hide. We lived in the center of Kabul. This is dangerous for them. I arrived seven days ago, and I haven’t heard how they are, and where they are.”

He posted a video on someone else’s Facebook page and hopes his family sees it by chance.

“I hope they see I am doing well, that I am in Italy,’’ he said. “I asked if they were OK, and hopefully they will also respond.”

He is certain that had he could not have stayed in Afghanistan.

“For me, there was no hope ... the risk was 100% because I worked with the Italian military. This is something they don’t want," he said.

Follow all of AP's coverage of Afghanistan at https://apnews.com/hub/afghanistan