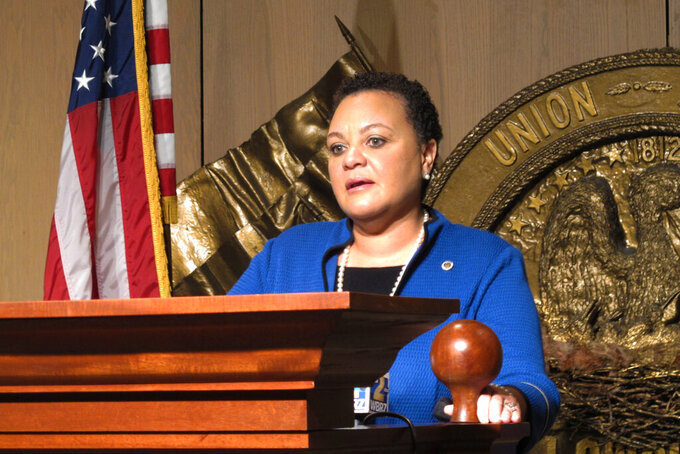 The charge against former Sen. Karen Carter Peterson, who resigned from the Legislature in April while citing battles with depression and gambling addiction, involved her past political campaigns and one-time chairmanship of the state party.

The U.S. Attorney's Office in New Orleans announced the charge Thursday. Peterson is scheduled to appear in court on Aug. 1.

Peterson's attorney, Brian Capitelli, said she would plead guilty to the charge and is cooperating with prosecutors.

“I sincerely apologize for the impact from my compulsive behavior resulting from this addiction,” Peterson said in a statement posted on Twitter.

Peterson resigned after more than two decades in the Legislature.

In a news release, the U.S. Attorney's Office in New Orleans said Peterson diverted campaign funds for personal use, including for gambling expenses. The bill of information charging Peterson said she also arranged for companies run by her associates to be hired by the state party. Those companies, the bill said, “provided either no or minimal services” to the party. It said portions of the money paid to them were given back to her. The associates weren't identified by name in the bill of information charging Peterson and no other charges have been announced so far.

“This marks an important step in Ms. Peterson‘s recovery as she continues to address her gambling addiction,” Capitelli's statement said. “She is sincerely remorseful for her compulsive behavior resulting from this addiction and has made full repayment of funds used as a result of her addiction.”

Peterson, 52, was elected to the state House in 1999 and to the Senate in 2010. She lost a U.S. House election last year to another New Orleans Democrat, Troy Carter. She chaired the state Democratic Party for eight years, from 2012 to 2020.