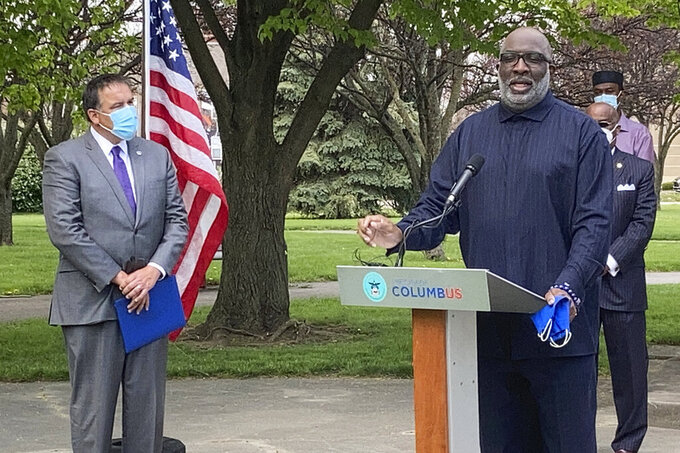 Andrew Welsh-Huggins, ASSOCIATED PRESS
Bishop Timothy Clarke of First Church of God in Columbus, right, calls for peaceful protests during a news conference Monday, April 19, 2021, in Columbus, Ohio. The conclusion of the trial for the officer charged in killing George Floyd in May of 2020 in Minneapolis approaches. Columbus Mayor Andrew Ginther is at left. (AP Photo/Andrew Welsh-Huggins)

COLUMBUS, Ohio (AP) — Politicians, religious leaders and community activists in Ohio's capital city called Monday for protests to remain peaceful as a verdict nears in the trial in the death of George Floyd.

The plea for calm also came as Columbus experiences record gun violence and is reeling from another fatal police shooting.

On April 12, Columbus police shot and killed Miles Jackson at Mount Carmel St. Ann's Hospital after a struggle that began when police realized Jackson had a gun in his sweatpants. Jackson, 27, was Black; the officers were white.

On Saturday, a drive-by shooting at a memorial vigil for an earlier homicide victim killed a passing motorist. Columbus has seen a record 60 homicides to date this year, a figure not reached until July 2 last year.

“All of us here want to implore our city and citizens, to please—even if you protest—to do it peacefully, and to do it knowing that all of us are fighting for justice, and we are demanding justice,” said Bishop Timothy Clarke, who leads First Church of God in Columbus. Clarke oversaw funerals for Casey Goodson Jr. and Andre Hill, Black men killed by white officers in December.