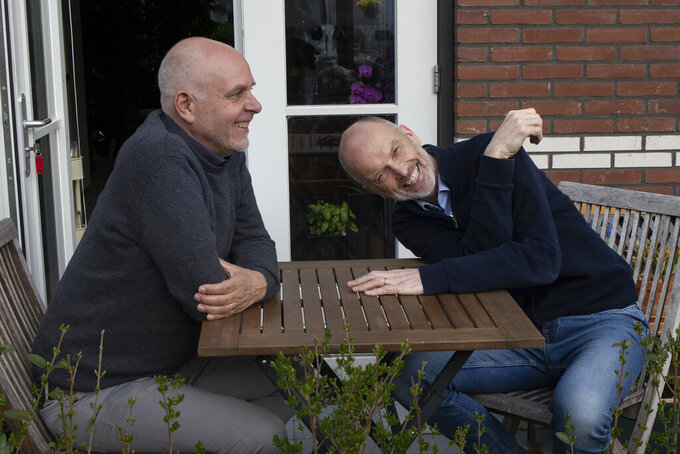 Peter Dejong, ASSOCIATED PRESS
Gert Kasteel, left, and Dolf Pasker, right, one of the first four couples who tied the knot when same-sex marriage was legalized in the Netherlands, react during an interview at their home in Weesp, near Amsterdam, Netherlands, Wednesday, March 31, 2021. Twenty years ago, the mayor of Amsterdam married four couples in City Hall as the Netherlands became the first country in the world with legalized same-sex marriage. It's now legal in 28 countries, including most of Western Europe, as well as in the self-governing island of Taiwan. (AP Photo/Peter Dejong)

But even as the city marked the milestone in LGBTQ rights, its mayor said that striving for equality remains a work in progress.

“At the same time it is a moment to recognize that the struggle is not yet over; not worldwide, not nationally, but also not in Amsterdam,” Mayor Femke Halsema told The Associated Press.

Since the historic event in Amsterdam 20 years ago, same-sex marriage has been made legal in 28 countries worldwide, as well as the self-governing island of Taiwan.

Gert Kasteel and Dolf Pasker were celebrating 20 years of married life Thursday. It's an anniversary made all the more special as they were among the first four couples who tied the knot just after midnight on April 1, 2001.

Wearing suits and bow ties, they were married in a ceremony led by then-mayor of Amsterdam Job Cohen in a wedding that made headlines around the world.

“It is very nice to look back to see how young we were,” said Pasker after watching video of the wedding on the evening before the anniversary.

Amsterdam also marked the anniversary by flying a huge rainbow flag from the bell tower of the landmark Wester Church church next to the Anne Frank House museum.

Later, the city was holding an online symposium, and it designated a “rainbow walk” route along 20 sites considered important in the struggle for LGBTQ rights.

In the city of Utrecht, Mayor Sharon Dijksma officiated the marriage of Romy Schouten and Jeannette van Nus and said the wedding ceremony should be an example for others.

“To all the boys and girls who are sitting at home and thinking, ‘Maybe I fall for people of the same sex but I dare not say it,’ the message here is: You can be who you are,” Dijksma said.

Sitting with his husband at a table in their backyard in a small town close to Amsterdam on a warm spring evening Wednesday, Pasker said he is pleased that the trail they blazed has been followed by many other nations.

“Nearly 30 countries followed the Netherlands so that’s really very nice. Very good for the gay people and for society as a whole, I think, because it’s important that everyone in society feels at home,” he said.

But COC, the country's largest LGBTQ rights organization, also said that work toward full equality is not complete in the Netherlands even two decades after the first same-sex marriage.

Pasker agrees, though he said it has not affected his marriage.

“In our private life it could not be better," he said. "But we know from newspaper, television and people we speak (to) that there still are homophobic people and there is some aggression to gay people. That’s still a problem.”

But as he counted down to his anniversary, he hoped others could live in the same wedded bliss.

“We wish all gay people in the world that they can have a life as we can live. It’s very important,” Pasker said.