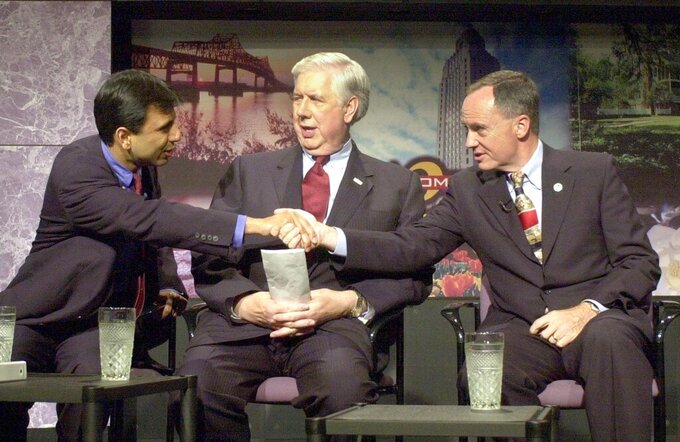 Bill Haber, ASSOCIATED PRESS
FILE - Louisiana gubernatorial candidates Bobby Jindal, left, Anthony Claude "Buddy" Leach Jr., center, and Hunt Downer greet each other before the start of a candidates' forum on Sept. 21, 2003, in New Orleans. Leach, who spent one term in the U.S. House and ran the budget committee in the Louisiana House before leading the state Democratic party, died Saturday, Aug. 6, 2022, according to a statement by Louisiana Gov. John Bel Edwards that did not include a cause of death. He was 88. (AP Photo/Bill Haber, File)

BATON ROUGE, La. (AP) — Anthony Claude “Buddy” Leach Jr., who spent a term in the U.S. House and ran the budget committee in the Louisiana House before leading the state Democratic party, has died. He was 88.

Leach died Saturday, according to a statement by Louisiana Gov. John Bel Edwards that did not include a cause of death.

Leach was elected to the Louisiana House three times starting in 1968 before winning a term in 1978 in the U.S. House from the state's 4th District along the state line with Texas. The Democrat lost his reelection bid in 1980 to Buddy Roemer, who was at the time a Democrat also.

Leach would return for one term in the Louisiana House in 1983, serving as chairman of the Ways and Means Committee.

Leach unsuccessfully ran for governor in 2003 and state treasurer in 1987. His last public role was two years as chairman of the Louisiana Democratic Party starting in 2010.

Edwards said Leach was a strong leader with a big heart who generously supported his wife's Louisiana First Foundation to help children.

“Buddy Leach dedicated his life to serving our great state. From the Louisiana Legislature to Congress to his many civic contributions, Buddy worked to make life better for all Louisianans,” Edwards said in a statement. “When I decided to run for governor, he was one of the first people to encourage me.”