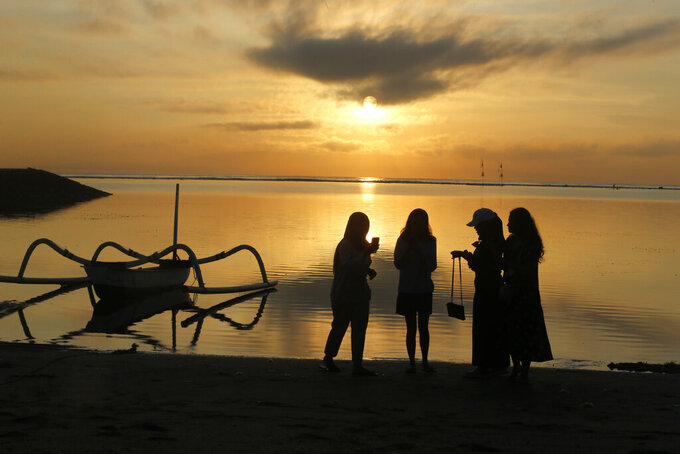 Firdia Lisnawati, ASSOCIATED PRESS
People watch the sun rise on Sanur Beach in Denpasar, Bali, Indonesia, Thursday, Oct. 28, 2021. Indonesians are looking ahead warily toward the upcoming holiday travel season, anxious for critical tourist spending but at the same time worried that an influx of millions of visitors could lead to a new coronavirus wave just as the pandemic seems to be getting better. (AP Photo/Firdia Lisnawati)

JAKARTA, Indonesia (AP) — Indonesians are looking ahead warily toward the holiday travel season, anxious for crucial tourist spending but worried an influx of visitors could spread the coronavirus just as its pandemic situation seems to be subsiding.

After seeing infection and death rates soar in July and August, officials said this week they are sticking to plans to allow travel with some limitations. They expect nearly 20 million people to vacation in the popular islands of Java and Bali.

The archipelago nation with the world’s fourth highest population has seen dramatic improvements since the devastating midyear months, but its vaccination rollout is lagging behind most others in Southeast Asia. Experts also question whether the official figures tell the true story, saying there is evidence many COVID-19 cases are going undetected and unreported, suggesting widespread travel could cause a resurgence.

“There is some progression in terms of number of cases and, of course, in mortality, but what the government reports doesn’t always represent or reflect the real situation in communities,” said Dicky Budiman, an Indonesian epidemiologist and academic adviser to the government.

Indonesia is transitioning to treating the coronavirus as an endemic disease rather than one that can be eliminated in the population. It is seeking to balance the idea of living with COVID-19 with precautions to minimize the risk of another broad outbreak.

After announcing that year-end travel would be permitted, the government on Wednesday cancelled the Christmas Eve holiday — on a Friday this year — in an effort to discourage vacationing somewhat.

“We hope that we can manage Christmas and the New Year well, because almost all epidemiologists are afraid that what triggers a third wave could be during Christmas and New Year,” he said in a statement.

The cancellation of the Dec. 24 holiday prompted cries of protest from the predominantly Muslim nation's Christian minority, highlighting the challenge of balancing safety restrictions with individual freedoms.

Indonesia has reported nearly 4.25 million cases and more than 143,000 deaths from COVID-19 among its 270 million people. As hospitals became overwhelmed by sick patients in July and ran out of beds and oxygen supplies, the 7-day rolling average of deaths soared to more than 1,700 by the end of the month and into early August — though on a per capita basis neighbor Malaysia suffered even worse.

Since then, however, the situation has improved dramatically and today Indonesia boasts among the lowest case and death rates in the region.

As things began to turn around, the government announced at the end of August that it was relaxing some restrictions, and by earlier this month had gone ahead with plans to reopen the resort island of Bali to some categories of international travelers. So far, no significant increase in the spread of the virus has been reported, though the number of visitors has remained low and exclusively from domestic locations so far, with no foreign flights yet.

But Indonesia’s vaccination rate is low compared to others in the region — raising fears a new outbreak could spread rapidly again and lead to large numbers of people requiring hospitalization. About 25% of Indonesian’s eligible population has been fully vaccinated, compared to 73% in Malaysia, 80% in Singapore, and even 41% in Thailand where the vaccine rollout was plagued with early delays.

Indonesia's vaccine campaign made a quick start centered in cities, but administering shots has become much more difficult on the archipelago nation, which consists of five major islands and thousands of smaller ones. The smaller, more rural areas also have significantly more limited health care facilities, meaning any major outbreak could cause major devastation.

Its actual number of cases could also be much higher than reported, due to inadequate testing and tracing, Budiman said. Studies suggest many asymptomatic cases have gone unreported, and in addition, many people are thought to have treated themselves at home either because they did not want to go to the hospital or because there was no room for them.

One study of antibodies of Jakarta residents done midyear by the University of Indonesia’s School of Public Health and others found that nearly half of people tested had been infected with COVID-19. Budiman said wider research suggests that as many as 15% of Indonesians — with some estimates as high as 29% — have been infected since the start of the pandemic.

The upside is that many unvaccinated Indonesians likely have developed a natural immunity, but Budiman predicts it will not be enough to prevent another surge, noting the protection of early vaccinations may be waning and that the widely used Sinovac and Sinopharm vaccines are proving less effective against the more contagious delta variant.

“Around 50 percent of our population is still very vulnerable because they don’t have immunity, and we have problems with the vaccine itself,” he said.

The situation makes it all the more important for the government to enforce existing health and safety regulations as it seeks to strike a balance between economic interests and managing the pandemic, said John Fleming, the Asia-Pacific head of health for the Red Cross.

"It’s critical as restrictions are eased that all public health measures are maintained, including high levels of testing, mask-wearing, maintaining physical distance and faster rates of COVID-19 vaccinations to prevent future deadly waves of this virus,” he said.

In announcing the cancellation of the Christmas Eve holiday earlier this week, Human Development and Culture Minister Muhadjir Effendy expressed hope that regulations on travel, including requiring people using public transportation to have at least one vaccination, and negative PCR tests for air travelers, would be enough to mitigate dangers.

“What we have to really consider, no matter how strict and conservatively we apply various provisions in order to inhibit and prevent the transmission of COVID-19, our economy must continue to move,” he said.