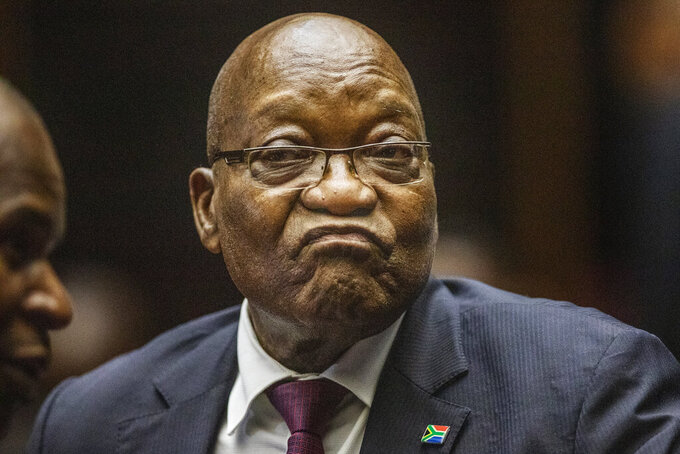 Michele SpatariI, ASSOCIATED PRESS
FILE - In this Oct. 15, 2019 file photo, former South African President Jacob Zuma appears in the High Court in Pietermaritzburg, South Africa. Zuma has been denied state funding for his legal fees in an upcoming corruption trial and has been ordered to pay back an estimated dollars 2 million in lawyers' charges that he has received over previous years. (Michele Spatari/Pool via AP, File)

JOHANNESBURG (AP) — Former South African president Jacob Zuma has been denied state funding for his legal fees in an upcoming corruption trial and has been ordered to pay back an estimated $2 million in lawyers' charges that he has received over the years.

The ruling delivered by the Supreme Court of Appeal on Tuesday means Zuma will have to pay for his legal representation from his own pocket and should refund the state legal expenses that have been paid to him since he was first charged with corruption in 2006.

The ruling upheld an earlier High Court judgment which determined that South African taxpayers should not have to pay for his legal fees in the corruption trial, a ruling he had appealed.

“If the state is burdened with the high legal costs of those public office bearers who are charged with such crimes, the taxpayer bears that burden," said the judgment.

The court also criticized Zuma for publicly criticizing the country's judicial system and the judges who ruled against him. Zuma had accused them of being biased against him without producing any evidence.

“There is nothing on the record to sustain the inference that the presiding judges in this matter (or at a more generalized level in other matters involving Mr. Zuma) were biased, or that they were not open-minded, impartial, or fair," said the ruling.

“The allegations were made with a reckless disregard for the truth,” the court said in the judgment.

Zuma is charged with corruption in the country’s controversial 1999 arms procurement deal and the trial is set to begin on May 17.

Zuma is accused of receiving bribes through his then financial adviser Schabir Shaik, who was convicted on related charges in 2005. Shaik was released on medical parole in 2009.

The latest ruling is a setback for Zuma, who faces legal battles on multiple fronts, including a pending court judgment on whether he should be jailed for refusing to testify at a state commission of inquiry which is probing graft while he was president from 2009 to 2018.

The commission has heard testimony that Zuma allowed members of the controversial Gupta family to influence his cabinet appointments and state contracts in favor of their businesses.

Zuma has refused to testify at the commission, where he has been implicated by several witnesses including people who were Cabinet ministers when he was president.