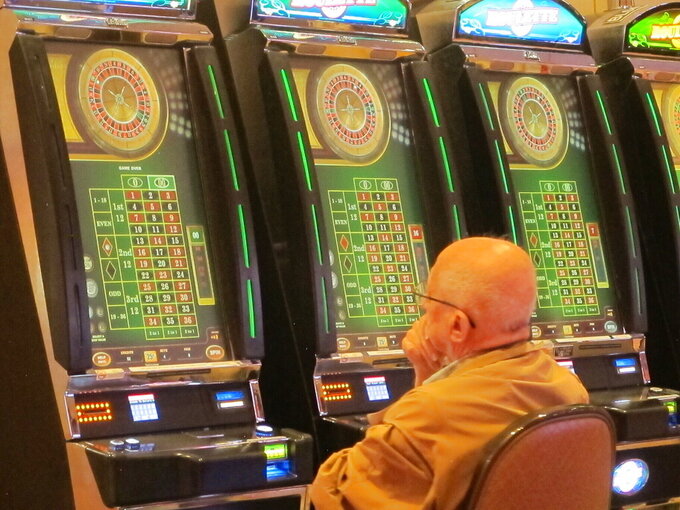 Wayne Parry, ASSOCIATED PRESS
This June 23, 2021, photo shows a gambler playing an electronic roulette game at Bally's casino in Atlantic City, N.J. Figures released Nov. 22, 2021, by New Jersey regulators show the Atlantic City casinos more than doubled their gross operating profit in the third quarter of this year, to over $310 million, compared with the same period a year ago, when coronavirus operating restrictions were in place. (AP Photo/Wayne Parry)

The New Jersey Division of Gaming Enforcement figures show the casinos posted a collective gross operating profit of more than $310 million in July, August and September of this year.

That is more than twice the $151 million profit they reported in the third quarter of 2020, when they were still operating under state-imposed capacity restrictions due to the coronavirus pandemic.

For that reason, James Plousis, chair of the New Jersey Casino Control Commission, said the results are not directly comparable.

“Through efficiencies, every operator posted a profit in the third quarter, a great accomplishment coming out of an extremely challenging period,” he said in a statement. “Atlantic City's recovery is gaining momentum and is on track for an impressive year."

Gross operating profit reflects earnings before interest, taxes, depreciation and other expenses, and is a widely accepted measure of profitability in the Atlantic City casino industry.

Jane Bokunewicz, director of the Lloyd Levenson Institute at Stockton University, which studies the Atlantic City gambling industry, said the casinos have been making do with fewer workers “by operating lean.”

“So far it seems operators have been able to successfully balance the currently reduced labor supply with growing consumer demand for resort amenities including lodging,” she said. “That does raise the question of the potential impact on future employment in the casinos, and if some currently unfilled jobs might ultimately be eliminated.”

Bally's posted a $2 million operating profit in the third quarter of this year, compared with a $13 million profit last year when it was still owned by Caesars Entertainment. The casino is now owned by Rhode Island-based Bally's Corp.

“We are pleased that the north end of the Atlantic City Boardwalk — ‘North Beach’ — continues to lead the market, with Hard Rock Atlantic City, Ocean Casino Resort and Resorts showing the majority of the increase in comparison to 2019," said Joe Lupo, Hard Rock's president.

In terms of hotel occupancy, Ocean had the highest average room price at $331, while Resorts had the least expensive at nearly $148.

The occupancy rate for the city's nine casinos as a whole was just over 81%.