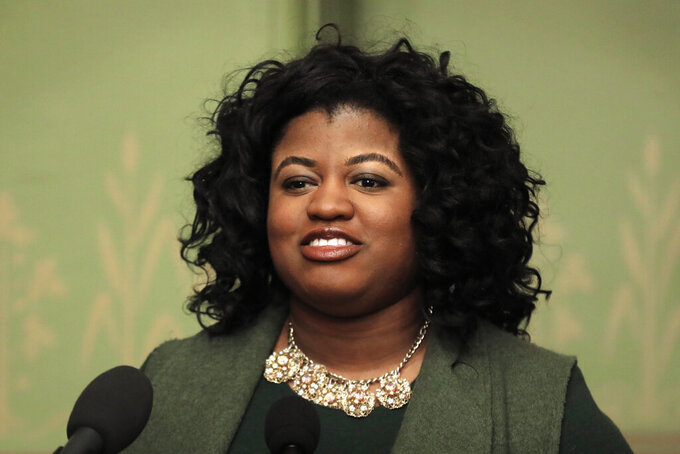 Charlie Neibergall, ASSOCIATED PRESS
FILE - In this Jan. 23, 2019 file photo, former Democratic candidate for Iowa Secretary of State Deidre DeJear speaks during a news conference, at the Statehouse in Des Moines, Iowa. DeJear said Monday, July 12, 2021, she is considering a run for Iowa governor. DeJear, a Democrat, announced formation of an exploratory committee and a tour of seven Iowa cities this week to discuss the idea with Iowans. (AP Photo/Charlie Neibergall, File)

DeJear announced the formation of an exploratory committee and a tour of seven Iowa cities this week to discuss the idea with Iowans. The tour begins at a Des Moines hair salon, then moves on to Clinton, Davenport, Muscatine, Burlington, Fort Madison and Ottumwa.

“It doesn’t matter if you are a Democrat, Republican, Independent, or someone who has given up on politics. Everyone deserves a listening ear and a seat at the table. In these divided times, it’s more important than ever to unite as Iowans," she said in a statement.

DeJear won the Democratic nomination for Iowa secretary of state in 2018, becoming the first Black person to be nominated by a major political party for a statewide office in Iowa. She was defeated in the general election by incumbent Republican Paul Pate.

She turned to fighting for voter rights, saying in a December 2018 letter to supporters that her “commitment to protect the right to vote is stronger every day.”

DeJear volunteered to work for Barack Obama's 2008 presidential campaign in Iowa. Obama endorsed her in the 2018 race for secretary of state, and she was Iowa chairwoman for Sen. Kamala Harris’ presidential campaign. After Harris left the race, DeJear endorsed Elizabeth Warren in February 2020.

DeJear, who was born in Jackson, Mississippi, moved to Iowa to attend Drake University in Des Moines and stayed after graduation. In 2008, she founded Caleo Enterprises, a company specializing in marketing and project development for small businesses and nonprofit organizations.

Iowa's Republican Gov. Kim Reynolds has not yet formally announced her intention to seek reelection but is expected to do so soon. The first woman elected governor in Iowa, Reynolds has held office since 2017,

In June, Iowa Rep. Ras Smith launched his campaign for the Democratic nomination for governor. He is serving his third term representing an area of Black Hawk County that includes his hometown of Waterloo.