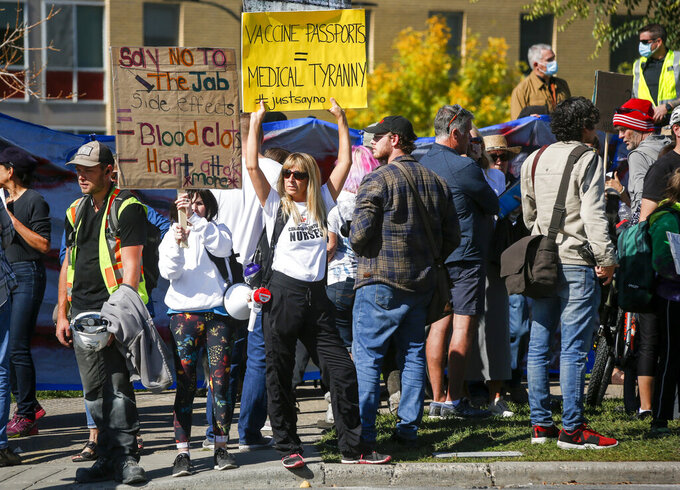 TORONTO (AP) — The leader of the Canadian province of Alberta apologized Wednesday for his handling of the pandemic and said he is reluctantly introducing a vaccine passport and imposing a mandatory work-from-home order two months after lifting nearly all restrictions.

Alberta declared a public health emergency as Premier Jason Kenney said hospitals might run out of beds and staff in intensive care units within 10 days.

“It is now clear that we were wrong, and for that I apologize,” Kenney said.

Indoor dining at pubs and restaurants is now banned.

Kenney said COVID-19 is hitting Alberta harder than anywhere else in Canada because it has the lowest rate of vaccination in the country.

He apologized for misreading the coronavius' likely path in June but said he wasn’t sorry for lifting all restrictions. He said he didn’t think a pandemic-weary population would continue to follow them.

“The government’s first obligation must be to avoid large numbers of preventable deaths. We must deal with the reality we are facing. We cannot wish it away,” Kenney said.

The premier, who is leader of the United Conservative Party, had declared the summer would be the “best summer ever,” but he said Wednesday that Alberta is now facing its greatest health care challenge.

Several Canadian provinces are bringing in vaccine passports, which compel people to prove they have been vaccinated before being allowed to use nonessential services such as pubs and restaurants. Kenney had resisted such measures.

Alberta has more than 18,000 active virus cases, far more than any other Canadian province.