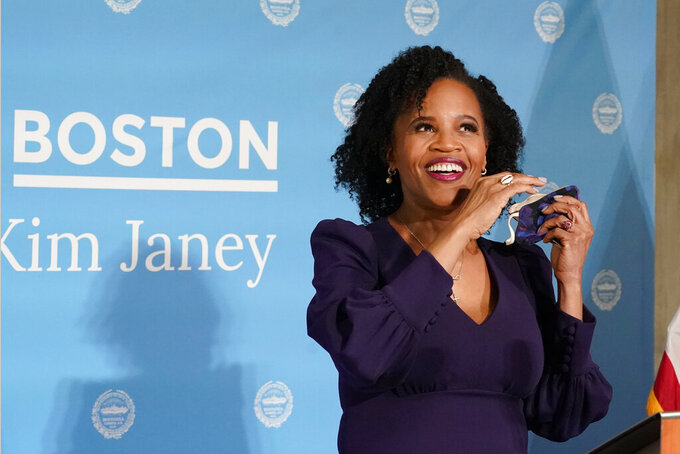 Elise Amendola, ASSOCIATED PRESS
FILE - In this Wednesday, March 24, 2021, file photo, former Boston City Council President Kim Janey takes off her face mask to speak after she was sworn in as Boston's new mayor at City Hall, in Boston. Acting Boston Mayor Janey officially announced Tuesday, April 6, 2021, that she will be a candidate for the job full time in the fall election. (AP Photo/Elise Amendola, File)

BOSTON (AP) — Acting Boston Mayor Kim Janey officially announced Tuesday that she will be a candidate for the job full time in the fall election.

“The work to address the challenges we face from COVID-19 and the racial inequalities that have been inherited from centuries of structural racism will take longer than a few months to change,” Janey said in a written statement.

“It is going to take fearless leadership, bold action and a commitment to doing the hard work to make Boston the equitable city our residents want, need and deserve. I am 100% committed to leading this change,” the Democrat added.

Janey released a video Tuesday morning talking about both her decision to seek the office and her history growing up in Boston. The three-minute video also included images of other Black political leaders in Boston.

The 55-year-old made history last month when she became both the first woman and the first Black Bostonian to step into the role of mayor when former Boston Mayor Marty Walsh resigned to become President Joe Biden’s labor secretary. She will serve as acting mayor under the fall election.

Janey isn’t the only woman or person of color running for the city's top political post.

The election is seen as a pivotal moment in the city’s political history, which for the better part of a century was largely helmed by Irish American men serving as mayor, with the notable exception for the late Thomas Menino, an Italian American and the city’s longest serving mayor.

Janey is hoping to follow Menino's path to the mayor's office full time.

When former Mayor Raymond Flynn stepped down to become President Bill Clinton’s ambassador to the Vatican, the then-city council president Menino stepped in as interim mayor in July 1993 and won the mayoral election later that year.

Janey became acting mayor because she was the city council president when Walsh stepped down.

The city's most recent political evolution was foreshadowed in early 2020, when women and minorities first reached a majority on the 13-member city council. Two years earlier, the state elected its first Black woman to Congress, Rep. Ayanna Pressley, another veteran of the Boston City Council.

Boston is now a “majority minority” city with white (non-Hispanic) people comprising roughly 46% of the population.

Janey has a long history in Boston.

Her grandfather, Daniel Benjamin Janey, was a member of Twelfth Baptist Church, where Martin Luther King Jr. worshiped while attending Boston University. Her father was one of only eight Black students to graduate from the city’s prestigious Boston Latin School in 1964.

During the second phase of Boston’s tumultuous school desegregation era, the then 11-year-old Janey was bused from her home in the traditionally Black neighborhood of Roxbury to the largely white neighborhood of Charlestown. Along the way she had rocks and slurs hurled at her.

“I’ve been at the center of Boston history. The bad and the good,” the Democrat said in the video.