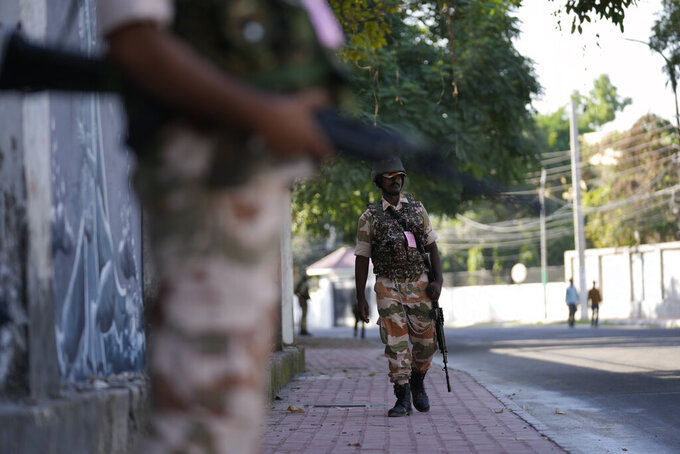 SRINAGAR, India (AP) — The prisons chief in Indian-controlled Kashmir has been killed, officials said Tuesday, as India’s powerful home minister arrived in the disputed Himalayan region on a three-day visit.

The body of Director-General of Prisons Hemant Kumar Lohia bore multiple wounds and was found Monday night at his friend’s home in the southern city of Jammu where he was visiting, police said.

An initial probe suggested that Lohia's household helper was behind the killing, senior police officer Mukesh Singh told reporters. He said the suspect fled the scene and added that the police investigation has not identified any militant link to the killing.

Police on Tuesday apprehended the suspect and began interrogating him.

However, a militant group, the People’s Anti-Fascist Front, or PAFF, claimed responsibility in a statement on social media.

India and Pakistan both claim the divided territory of Kashmir in its entirety. Rebels in the Indian-controlled portion of Kashmir have been fighting against New Delhi’s rule since 1989. Most Muslim Kashmiris support the rebel goal of uniting the territory, either under Pakistani rule or as an independent country.

The PAFF statement said the killing was a “small gift” to Home Minister Amit Shah, who arrived in the region on Monday.

The rebel group’s statement could not be independently verified.

Security officials have blamed groups like PAFF for many killings of police and civilians, but militants have not killed a high-profile official such as Lohia in recent years.

“This is just a beginning of such high-profile operations,” the PAFF statement said.

The group emerged after India in 2019 stripped the region of its semi-autonomous status, scrapped its statehood, and undertook a massive security and communications lockdown while taking direct control of the region. Kashmir has remained on edge ever since as authorities have put in place a slew of new laws which many Kashmiris fear could change the region’s demographics.