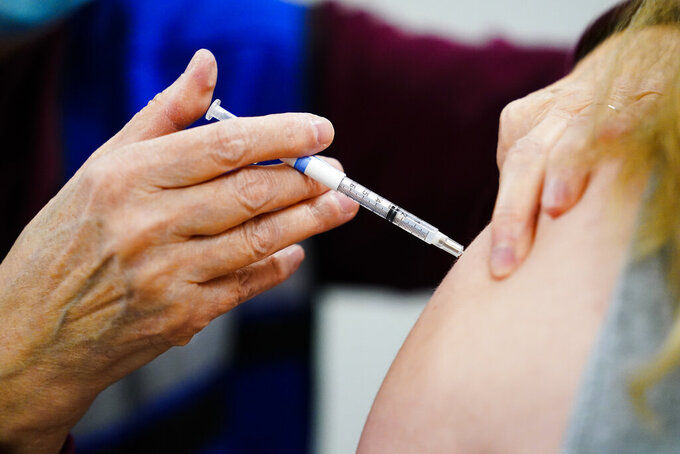 Matt Rourke, ASSOCIATED PRESS
FILE - A health worker administers a dose of a COVID-19 vaccine during a vaccination clinic at the Keystone First Wellness Center in Chester, Pa., on Dec. 15, 2021. Government advisers are debating Tuesday, June 28, 2022, if Americans should get a modified COVID-19 booster shot this fall — one that better matches more recent virus variants. (AP Photo/Matt Rourke, File)

At least some U.S. adults may get updated COVID-19 shots this fall, as government advisers voted Tuesday that it's time to tweak booster doses to better match the most recent virus variants.

Advisers to the Food and Drug Administration wrestled with how to modify doses now when there's no way to know how the rapidly mutating virus will evolve by fall — especially since people who get today's recommended boosters remain strongly protected against COVID-19's worst outcomes.

Ultimately the FDA panel voted 19-2 that COVID-19 boosters should contain some version of the super-contagious omicron variant, to be ready for an anticipated fall booster campaign.

“We are going to be behind the eight-ball if we wait longer,” said one adviser, Dr. Mark Sawyer of the University of California, San Diego.

The FDA will have to decide the exact recipe, but expect a combination shot that adds protection against either omicron or some of its newer relatives to the original vaccine.

“None of us has a crystal ball" to know the next threatening variant, said FDA vaccine chief Dr. Peter Marks. But “we may at least bring the immune system closer to being able to respond to what's circulating” now rather than far older virus strains.

It's not clear who would be offered a tweaked booster — they might be urged only for older adults or those at high risk from the virus. But the FDA is expected to decide on the recipe change within days and then Pfizer and Moderna will have to seek authorization for the appropriately updated doses, time for health authorities to settle on a fall strategy.

Current COVID-19 vaccines have saved millions of lives globally. With a booster dose, those used in the U.S. retain strong protection against hospitalization and death but their ability to block infection dropped markedly when omicron appeared. And the omicron mutant that caused the winter surge has been replaced by its genetically distinct relatives. The two newest omicron cousins, called BA.4 and BA.5, together now make up half of U.S. cases, according to the Centers for Disease Control and Prevention.

Pfizer and Moderna already were brewing boosters that add protection to the first omicron mutant. Their combination shots, what scientists call “bivalent” vaccines, substantially boosted levels of antibodies capable of fighting that variant, more than simply giving another dose of today's vaccine.

Both companies found the tweaked shots also offered some cross-protection against those worrisome BA.4 and BA.5 mutants, too, but not nearly as much.

Many scientists favor the combination approach because it preserves the original vaccines' proven benefits, which include some cross-protection against other mutants that have cropped up during the pandemic.

The question facing FDA is the correct recipe change. Both companies said they’d have plenty of omicron-targeted combo shots by October but Moderna said switching to target omicron’s newest relatives might delay its version another month.

Further complicating the decision is that only half of vaccinated Americans have received that all-important first booster. And while the CDC says protection against hospitalization has slipped some for older adults, a second booster that's recommended for people 50 and older seems to restore it. But only a quarter of those eligible for the additional booster have gotten one.

Marks said that by tweaking the shots, “we're hoping we can convince people to go get that booster to strengthen their immune response and help prevent another wave.”

The logistics will be challenging. Many Americans haven't had their first vaccinations yet, including young children who just became eligible — and it's not clear whether tweaked boosters eventually might lead to a change in the primary vaccine. But the FDA's advisers said it's important to go ahead and study updated vaccine recipes in children, too.

And one more complexity: A third company, Novavax, is awaiting FDA authorization of a more traditional kind of COVID-19 vaccine, protein-based shots. Novavax argued Tuesday that a booster of its regular vaccine promises a good immune response against the new omicron mutants without a recipe change.

Advisers to the World Health Organization recently said omicron-tweaked shots would be most beneficial as a booster only, because they should increase the breadth of people's cross-protection against multiple variants.

“We don’t want the world to lose confidence in vaccines that are currently available,” said Dr. Kanta Subbarao, a virologist who chairs that WHO committee.