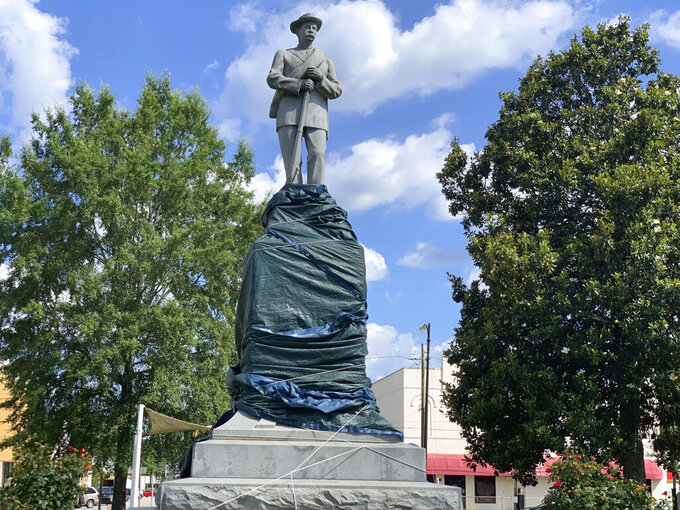 Kim Chandler, ASSOCIATED PRESS
FILE - A Confederate monument in Tuskegee, Ala., is shown with its base wrapped in tarps on June 12, 2020. A Confederate heritage group will fight an Alabama county's lawsuit that could lead to the removal of the rebel monument in the heart of nearly all-Black Tuskegee, the group's lawyer said Tuesday, Nov. 30, 2021. (AP Photo/Kim Chandler)

BIRMINGHAM, Ala. (AP) — A Confederate heritage group will fight an Alabama county's lawsuit that could lead to the removal of a rebel monument in the heart of nearly all-Black Tuskegee, the group's lawyer said Tuesday.

While Macon County has asked a court to give it the deed to a downtown square where the memorial has stood for 115 years — potentially a key first step toward taking down the statue — the United Daughters of the Confederacy owns the square legally and wants the monument to remain, said Jay Hinton, an attorney for the group, in its first public response to the court fight.

"All of those members have ancestors who are honored by that monument,” he said.

The monument, located in front of the county courthouse in a city of 9,400 that is 97% Black, has been the subject of on-and-off protests and attempts to remove it for decades.

The monument went up at a time when groups all over the South were erecting Civil War memorials to honor rebel troops and portray the cause of the slave-holding Confederacy as noble. Hundreds have been taken down in recent years as they came to be seen as symbols of racial oppression against Black people.

Controlled by whites at the time despite having a majority black population, Macon County in 1906 gave a plot at the center of Tuskegee to the Confederate group for use as the site of a rebel monument and as a “park for white people,” records show. The county now contends the land transfer was unconstitutional, partly because of the racial clause.

The United Daughters of the Confederacy, which has about a dozen members in Tuskegee, never attempted to exclude anyone from the park because of race and considers the racial restriction offensive, Hinton said, but the wording doesn't mean that the county should get the land back.

“We believe we have owned and still own the square,” he said.

While the group has worked with the county and city to come to an agreement, “the only proposal that continued to be offered was simply for the chapter to pay to take down its monument, move it and give the county back the land,” he said. The group refused.

A Tuskegee City Council member used a saw to damage the statue earlier this year in hopes it would topple over, but it didn't and the county subsequently filed suit in September. The United Daughters of the Confederacy has since spent several thousand dollars on repairs, Hinton said.

Located about 40 miles (64 kilometers) east of the state capital of Montgomery, Tuskegee is the home of Tuskegee University. The town airfield was where the nation's first Black military pilots, the Tuskegee Airmen, trained during World War II.