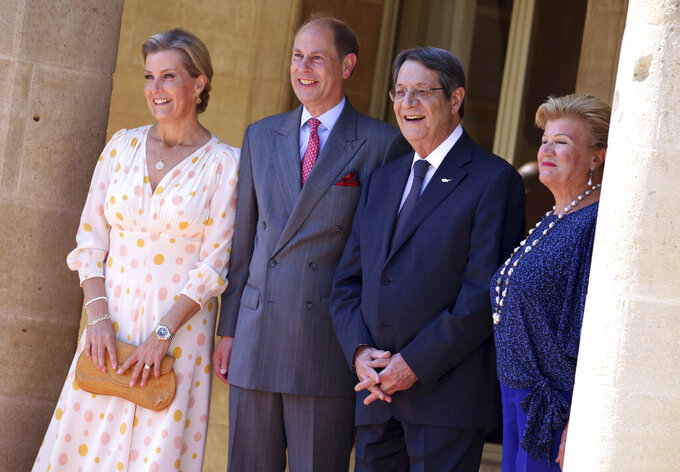 NICOSIA, Cyprus (AP) — The Earl and Countess of Wessex met Tuesday with the president of Cyprus as part of a three-day visit to the former British colony to underscore close bilateral ties and to meet soldiers serving with a U.N. peacekeeping force and those stationed at two U.K. military bases.

The Earl — the youngest child of Queen Elizabeth and her late husband Prince Philip — and his wife were received by Cypriot President Nicos Anastasiades and his wife Andri at the Presidential Palace in the capital, Nicosia.

Anastasiades was expected to discuss with the royal couple ways to bolster relations between the U.K. and Cyprus, where thousands of British expatriates live and many more visit as a popular vacation destination.

Cyprus was split in 1974 when Turkey invaded following a coup by supporters of union with Greece. Numerous rounds of reunification talks with Turkish Cypriots — whose declaration of independence is recognized only by Turkey — have failed.

The royal couple will also meet British peacekeepers inside a U.N. buffer zone that cuts across the Cypriot capital. The Countess will speak with women and young people who are working to bolster peace efforts.

The Earl and Countess will be briefed on current operations by British forces stationed at two military bases the U.K. retained following Cyprus’ independence in 1960.