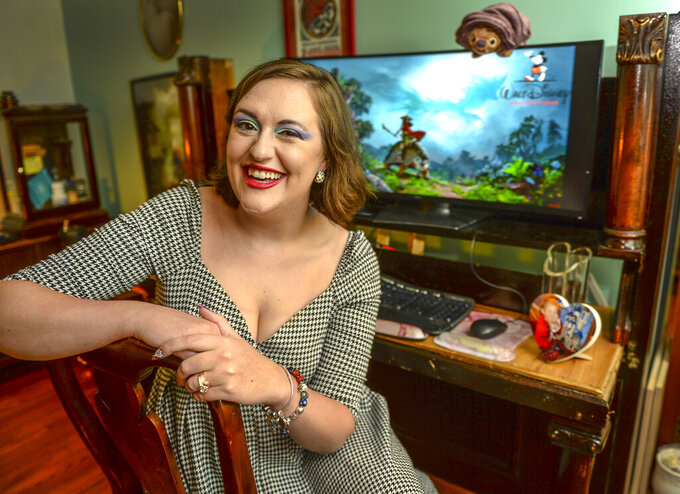 Kenny Kemp, ASSOCIATED PRESS
Disney artist Jillian Howell poses at her parents home in Scott Depot, W.Va., Thursday, June 19, 2021. Back in L.A., she’s moved up now to the role of production coordinator for Disney’s Creative Legacy department, which handles special projects for theme parks. It is a dream job, playing a role in producing the films and creating the effects that dazzle kids and adults alike around the world. (Kenny Kemp/Charleston Gazette-Mail via AP)

CHARLESTON, W.Va. (AP) — Say you wanted to carve a career track that would take you from a nice, suburban neighborhood in Scott Depot to the magical Walt Disney Studios in Los Angeles, where you would land a dream job working on such famous projects as “Frozen II” and “Raya and the Last Dragon.” You could figuratively grab a machete and start chopping away at the many, many barriers — real and imagined — that stand in the way.

Or you could follow the path just set by Jillian Howell, which reads like a modern day fairy tale.

“I always tell people that it started when Santa Claus brought me a Barbie video camera when I was seven years old — I just started making videos,” said Howell, now 26.

“I went to Winfield (Middle School and High School)and in seventh grade, that was kind of the YouTube boom. I got my first digital camera and taught myself how to edit on Windows Movie Maker on my mom’s Dell. And I remember turning to my mom and being like, ‘I can do this as a job.’”

She was hired to produce video slideshows for different sports teams, and created a YouTube group called PJM Squared Productions.

“It was me and three friends from my soccer team. And we just made little video skits that we put on YouTube. ... and I think they’re still up there. They’re kind of embarrassing. But, you know, you’ve got to start somewhere. And that was how I really learned to start hearing, like, feedback. And just really learning how to honestly, like at 12 years old, how to project manage, how to produce, how to direct.”

By high school, it seemed, the road was set. She wanted to work in film.

She did announcement videos for the morning broadcast, and in her senior year started Music Video Mondays.

“And a lot of those got huge notoriety online. We were on the news. I won a young filmmakers award at WVU. So that was another just kind of solidification of this is the path that I want,” she said.

The problem — and every good fairy tale has them — was the lack of a clear path, or really any path, for getting from here to there. At the end of the day, it was really about trusting her own instincts and following her heart.

“It’s interesting in West Virginia ... I found that a lot of people would say, like, ‘Oh, you can do broadcast journalism,’ or ‘Oh, you can, you know, do advertising,’ but I was just very firm. I want to work in film. And at the time, there wasn’t really like an indie film scene built up here that I could really tap into. So it was a lot of just experimenting on my own and trying to be resourceful and coming up with an idea and just kind of trying to see it through.”

She took core classes at Marshall University, then transferred to the University of North Carolina at Wilmington — “They used to be the Hollywood of the East” — to study film, and even took a semester off, despite the baffled reaction of her professors, to take part in the Disney College program.

“It was always a dream of mine because I was always a huge Disney fan, obsessed with Disney and the parks. And so for me it was like a bucket list item, getting to actually work in the parks and run a ride. And that ended up being great to teach me stamina and about the company,” she said.

“I wouldn’t say that it necessarily is the reason that I was able to get my job that I have now, but it definitely helped create that groundwork.”

Back on campus, she juggled school work, narrative short films and short documentaries for nonprofits. “And then one of my friends was like, ‘Hey, will you produce my film for me?’ And I was like, ‘Oh, I don’t really do that. I kind of, you know, write and direct my own stuff.’ He said ‘You finished more films than anybody else. I think you’re a producer.’ And I was like, ‘Wow.’

“And working on his short film as a producer was one of the easiest things I’ve ever done. Like it came so naturally, so just, yeah, I am a project manager. ... That was kind of an ‘aha’ moment,” said Howell.

There was hard work — and a few lucky breaks. Somewhere in the summer before her senior year, her mom, former WSAZ-TV news anchor Kathy Young, was chatting with a former colleague and mentioned that Jillian had recently returned from a semester with Disney.

“And he said, ‘Oh, do you remember Terry Williams who worked with us? He works for Disney in California now, and I’ll put her in touch with him.’ ... And so I was very excited because, obviously, a huge Disney fan, had just come back from the college program. Absolutely I wanted to learn from him,” she said.

She called Williams — he now works for Disney in the Parks Marketing Department — and they chatted pleasantly for a while.

Jillian had never been to Los Angeles, and had no plans to go then.

But that wasn’t about to stop a would-be film producer from seizing an opportunity when it was dangled right in front of her.

“And I was like, ’Oh, that’s so interesting. I’m actually going to be in town, you know, this month.”

She laughs at the memory — but she jumped through all the hoops to make that trip.

“And so I got to see around his office and we had lunch and, you know, there was no job offer. It was really just me being genuinely interested in what they were doing,” she said.

Fast forward to her graduation day in May 2017.

“I didn’t have a job. I had applied and interviewed for different internships and hadn’t gotten anything and was going to go to Atlanta and work in Starbucks or do another Disney College program, just trying to figure it out.

“And I get an email from Terry that said, ‘Hey, it’s not working out with the person that we were going to hire for our internship. Are you still available or interested?’”

About a week later, there was an informational remote interview with a recruiter. But since they’d already met her in person, the job offer came during that first interview.

“I was blown away. So within two weeks, I was flipping the script” — producer lingo for turning the story line upside down — “and moving to L.A.”

“I bought a one way ticket to Los Angeles and packed everything up, kissed my fiancee at the time, now husband, goodbye. He was still going to Atlanta. And so I went out completely alone. ... It was daunting, but at the same time, just so exhilarating, being able to finally be around other folks interested in the kind of work that I wanted to do,” she said.

The internship was with the Yellow Shoes Creative Group, Disney Parks’ internal ad agency — so named because, well, look at Mickey’s feet.

“My first screen credit was actually the Disney Parks Magical Christmas Celebration, which is the ABC parade that they show on Christmas morning. So I was on set for American Idol when they filmed at the park, and the Disney Channel Fan Fest. And then also I was able to kind of prove myself in their edit bay, too, because I’ve always edited my own stuff.”

She had the internship for a year, and felt like she was surrounded by possibilities. It was magical, in a way — like so many Disney things — and seemed that anything, everything, could happen if you just believed.

“I never thought I could work in animation. I can’t draw. I thought that you had to be a visual artist or a master of computer generated imagery. You know, I can’t do that,” she said.

Then she attended a presentation called the Trailblazing Women of Disney Animation, where she heard from Ruthie Thompson, now 110 years old and known for her work on the 1937 animation of “Snow White and the Seven Dwarfs,” and Amy Smeed, the head of the Disney animation team that helped to create “Moana,” Disney’s 2016 hit about Pacific voyagers.

“I just sent (Smeed) a message saying, you know, ‘I really enjoyed what you talked about at the event. I would love to have coffee if you’re ever available,’” said Howell.

They had lunch instead — and that eventually led to a job starting in January, 2019, as a production assistant with Walt Disney’s Animation Studios where she worked in the stereo department on “Frozen II.” Short for stereoscopic, that’s the department that created the 3D version of the film.

She did all the little things that needed to be done — and soaked up knowledge along the way.

“So each department has their own production assistants, their own coordinator, their own supervisor. And like, the person that’s working on Elsa’s acting is different from the person working on animating her hair or her actual dress,” she said.

Next came a stint in the lighting department for “Raya and the Last Dragon.”

“Lighting is the final step of the process, and it is what it sounds like. They’re actually manipulating the film to have different colors, to show different emotions, and really just tying the whole thing together.”

“And then we went home in March. We received an email that we would go home for two weeks,” she said, and laughed.

“‘Raya’ was made almost completely from home shop production. ... It even says in the end, the credit talks about how it was all made from from folk’s homes.”

She joined the virtual wrap party from her parents’ home in Scott Depot.

Back in L.A. now, she’s moved up to the role of production coordinator for Disney’s Creative Legacy department, which handles special projects for theme parks.

“They did a Peter Pan ride for Tokyo. So our team would be brought in because ... we have the brand experts. We have all the artwork. We have artists who know the design. So that way we can create any custom animation that they need. And it’s really grown since ‘Frozen,’ this department has, just because there’s been so many requests. I mean, they’re still opening new ‘Frozen’ rides overseas,” she said.

It is a dream job, playing a role in producing the films and creating the effects that dazzle kids and adults alike around the world.

So much has happened in four short years.

But for Jillian, the dream is just beginning.

“I want to be either a creative producer or a director. ... I could definitely see myself producing animated films,” she said.

The biggest difference now is that no one is telling the kid with big dreams from West Virginia that it can’t be done.