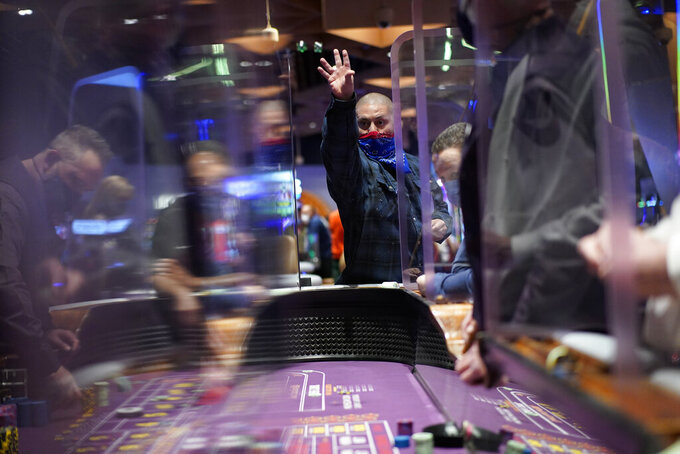 But a spike in COVID-19 cases since mid-May — and the restoration of indoor mask mandates for vaccinated and unvaccinated people on Friday — clouds the outlook for a state heavily reliant on tourism and gambling.

“It feels like we’re in the midst of a real-life action thriller,” said Alan Feldman, a former casino executive who is now a fellow at the International Gaming Institute at the University of Nevada, Las Vegas. “Will the delta variant (of COVID-19) spread so fast that further restrictions have to be implemented?”

“We’ll just have to see if there is to be further damage to the state’s economy before we can comfortably say that we’re out of the woods,” Feldman said.

Gov. Steve Sisolak lifted mask mandates in May but imposed a rule this week beginning at 12:01 a.m. Friday requiring face coverings indoors regardless of vaccination status in Las Vegas, Reno, Carson City, Elko and other urban centers. The Democratic governor followed an indoor masking recommendation from the Centers for Disease Control and Prevention for counties with high coronavirus transmission rates.

The spread of coronavirus in Nevada has drawn nationwide attention and travel warnings from officials in Los Angeles, Chicago and Hawaii.

The two-week test positivity rate, a measure of community spread of the virus, has more than quadrupled in Nevada from a low of 3.4% in mid-May to 14.3% statewide on Thursday and 15.5% in the Las Vegas area.

Among travelers, McCarran International Airport on Wednesday reported monthly passenger volume continued a steady monthly increase in June, with 3.8 million travelers arriving and departing. The airport is a main conduit for visitors to Las Vegas.

International travelers were less than one-tenth the number in June 2019 — a month offering a pre-pandemic benchmark from a year that the airport handled a record 51.5 million passengers.

That was more than double the $567 million reported in June 2020, the first partial month of reopening after pandemic casino closures. But it also topped the monthly casino win figure of $1.04 billion in June 2019.

“Every market increased over June 2019 with the exception of the Las Vegas Strip,” said Michael Lawton, senior board analyst. Winnings at resorts on and around Las Vegas Boulevard were down 1%. They still accounted for more than half of all casino winnings statewide.

He said the $3.46 billion total in April, May and June amounted to the largest gaming win figure in a calendar quarter in state history. It beat the previous high of $3.26 billion in October, November and December 2006.

The state reaped $808.6 million in revenues based on those winnings, a big increase from $472 million in fiscal 2020 and an important part of the $8.7 billion state budget for the next two years. Casino taxes are second to sales taxes as a percentage of the state budget. Nevada has no personal income tax.

Compared with fiscal year 2019, casinos won 10.5% less in the last 12 month, with the Las Vegas Strip accounting for the majority of the decrease, Lawton said.

Statewide slot machine winnings of $868 million in June broke the previous record set in October 2007, and sports betting win and volume were better than any June in state history, Lawton said.

Almost $315 million was wagered on sports, with bets taken by mobile apps accounting for almost 58% of the total.

This story has been corrected to show house winnings on card and table games were down nearly 20% from 2019, not up nearly 51%.