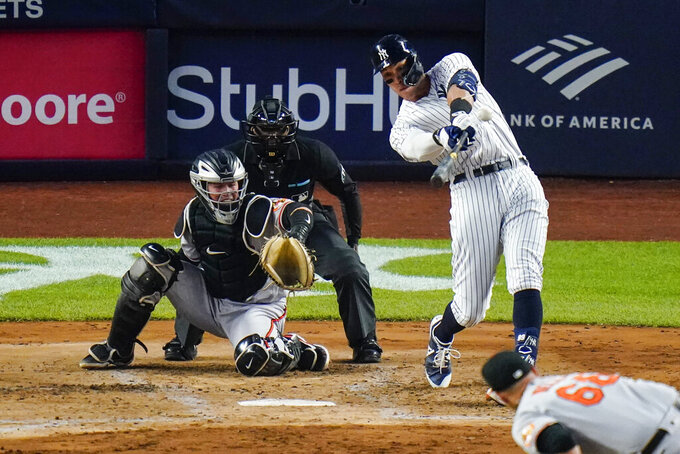 NEW YORK (AP) — All of a sudden, some of the biggest stars on the New York Yankees are absent.

Their lesser-known replacements are ready to keep the engine humming.

“It’s been a tough couple of days for us, just some people going down and things,” New York manager Aaron Boone said. “Really excited to see those guys step in and play a key role and help us get another series victory.”

Aaron Judge doubled and scored on a single by Miguel Andújar — his first RBI in the big leagues this season. Andújar was recalled from the minors Monday when Josh Donaldson went on the COVID-19 injured list.

New York added a second run in the fourth on a wild throw by rookie catcher Adley Rutschman. Gleyber Torres scored from third when the top-rated prospect, called up last weekend, committed his first error in the majors trying to nab Andújar stealing second.

Fill-in closer Clay Holmes struck out Jorge Mateo with runners at the corners to end it.

“Lot of guys, young guys stepping up right now, which is awesome to see,” Holmes said.

But still, New York shut down the struggling Orioles on Star Wars night at Yankee Stadium to win a second consecutive game following its first three-game slide of the year. Judge and the Yankees took two of three in the series and boast the best record in baseball at 31-13 heading into their first matchup this season with AL East rival Tampa Bay.

Sears (2-0) worked around a leadoff walk and an error in the first inning, then pitched out of trouble again in the second. The 26-year-old lefty, recalled from Triple-A Scranton/Wilkes-Barre before the game, allowed three hits and two walks while striking out five in a spot start after last Friday's rainout forced a doubleheader Sunday.

“I definitely felt more comfortable as I went," Sears said. “The stuff was sharper each inning I was out there.”

With his parents and girlfriend cheering from the stands, Sears averaged 93.7 mph with his fastball and mixed 55 heaters and 24 sliders with five changeups. He threw just four pitches in a 1-2-3 fourth.

“It was awesome. I had my family here and 15 friends," said Sears, optioned back to Triple-A after the game. “I got to see them all and it makes it even better because they were here and I look forward to the next one, whenever that is.”

Rookie right-hander Ron Marinaccio struck out three in two perfect innings. Lucas Luetge got two outs in the eighth and Miguel Castro fanned Austin Hays with a runner on to end the inning.

Holmes, subbing for injured All-Star closer Aroldis Chapman, gave up two hits in the ninth before securing his fifth save. Holmes threw 14 of 15 pitches for strikes and extended his scoreless streak to 23 innings.

“In the meantime, we're going to have to have guys step up and I think we realize that and we look forward to the challenge,” Holmes said. “I think we've pushed each other and we make each other better, and it's fun to see guys come through.”

“His stuff was good,” said Rutschman, who had two hits. “He was able to locate his pitches, move his fastball around. I think he looked really good.”

Wells got help from right fielder Anthony Santander, who saved a run with a diving grab to rob Judge of a hit in the fifth.

Yankees: Joey Gallo was reinstated from the COVID-19 injured list and started at DH. Donaldson remained on the COVID-19 list, and All-Star infielder DJ LeMahieu sat out for the second consecutive night because of left wrist discomfort. LeMahieu was feeling better after a cortisone shot Tuesday and the team hopes to have him back in a day or two.

After the game, the Yankees also optioned OF Estevan Florial back to Triple-A. LHP Manny Bañuelos was in the clubhouse ready to go on the road trip as a member of the taxi squad.

Orioles: Following an off day, Baltimore begins a five-game series at Fenway Park on Friday night. RHP Kyle Bradish (1-3, 5.74 ERA) is scheduled to make his sixth career start — and second against Boston.

Yankees: Open a four-game series Thursday night at Tampa Bay with LHP Nestor Cortes (3-1, 1.80 ERA) on the mound. Tampa Bay went 11-8 against the Yankees last year, outscoring them 98-50 on the way to its second consecutive division title.