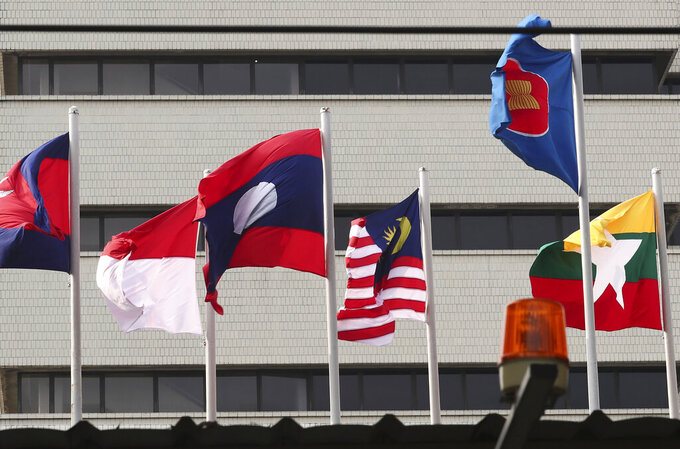 Tatan Syuflana, ASSOCIATED PRESS
In this April 22, 2021, file photo, flags of some of the ASEAN member countries fly at the ASEAN Secretariat in Jakarta, Indonesia. Southeast Asia’s top diplomats were meeting Monday, Aug. 2, 2021, to appoint a special envoy to help deal with the political crisis and violence gripping Myanmar and finalize an emergency plan to help control a coronavirus outbreak that many fear is spiraling out of control in the military-ruled nation. (AP Photo/Tatan Syuflana, File)

MANILA, Philippines (AP) — Southeast Asia’s top diplomats were meeting Monday to appoint a special envoy to help deal with the political crisis and violence gripping Myanmar and finalize an emergency plan to help control a coronavirus outbreak that many fear is spiraling out of control in the military-ruled nation.

The foreign ministers of the Association of Southeast Asian Nations were also expected to announce after their video meeting some progress in four years of painstakingly slow negotiations with China to craft a nonaggression pact aimed at preventing conflict in the disputed South China Sea.

The 10-nation bloc, frequently dismissed by critics as an ineffective talk shop, has been under increasing international pressure to act on the troubles unfolding in Myanmar, an ASEAN member where the military in February toppled the elected government of Aung San Suu Kyi. The grouping, however, is hamstrung by its policy of noninterference in the domestic affairs of member nations as well as its requirement to reach a consensus among members.

In Monday's online meeting the ministers were to decide who among at least three nominees from Thailand, Indonesia and Malaysia should be designated as the bloc’s special envoy to try to broker a settlement between the country's ruling generals and rival parties led by Suu Kyi, a Southeast Asian diplomat told the Associated Press.

Myanmar prefers the candidate from Thailand, former Thai ambassador to Yangon Virasakdi Futrakul, but it remains uncertain when its military leaders would decide to accept the envoy and if access to Suu Kyi, who has been detained with other political leaders and put on trial for a slew of charges, would be granted, said the diplomat, who spoke on condition of anonymity because of lack of authority to discuss the issue publicly.

More than 900 people have been killed by Myanmar authorities since the February takeover, according to a tally kept by the independent Assistance Association for Political Prisoners. Casualties are also rising among the military and police as armed resistance grows in both urban and rural areas.

ASEAN leaders met in the Indonesian capital of Jakarta in April and called for an end to the violence and the start of a dialogue among contending parties to be mediated by an ASEAN envoy.

On Sunday, Myanmar's military leader Min Aung Hlaing repeated his pledge to hold fresh elections in two years and cooperate with ASEAN on finding a political solution. He said without elaborating that Myanmar “is ready to work on ASEAN cooperation within the ASEAN framework, including the dialogue with the ASEAN special envoy in Myanmar.”

Myanmar's troubles have deepened with its worst surge of the pandemic, which has overwhelmed its crippled health care system. Limits on oxygen sales have led to widespread allegations that the military is directing supplies to government supporters and military-run hospitals.

In Monday’s meeting, the ASEAN ministers were to looking to finalize a plan to bring in medicine and medical equipment to Myanmar through the regional bloc’s disaster-response center with the military leaders’ approval.

Greg Poling, an analyst on Southeast Asia for the Center for Strategic and International Studies in Washington, said it’s critical for ASEAN to gain humanitarian access in Myanmar but added that the aid would not automatically mean the military leaders would accede to the bloc’s political demands.

“ASEAN has no leverage with the junta,” Poling said.

In addition to Myanmar, the other ASEAN members are Brunei, Cambodia, Indonesia, Laos, Malaysia, the Philippines, Singapore, Thailand and Vietnam. The ministerial meetings this week include the ASEAN Regional Forum, a security conference where North Korea attends along with the United States, China, Russia, Japan and South Korea.

On the South China Sea disputes, ASEAN ministers are expected to announce the completion of the preamble of a “code of conduct” that the bloc has been negotiating with China since 2017, according to two other Southeast Asian diplomats who also spoke on condition of anonymity because they were not authorized to speak publicly.

The preamble calls for adherence to international law, said the diplomats, who expect the next round of talks to be stormy as rival claimants China, Taiwan and ASEAN members Brunei, Malaysia, the Philippines and Vietnam tackle the most contentious issues.