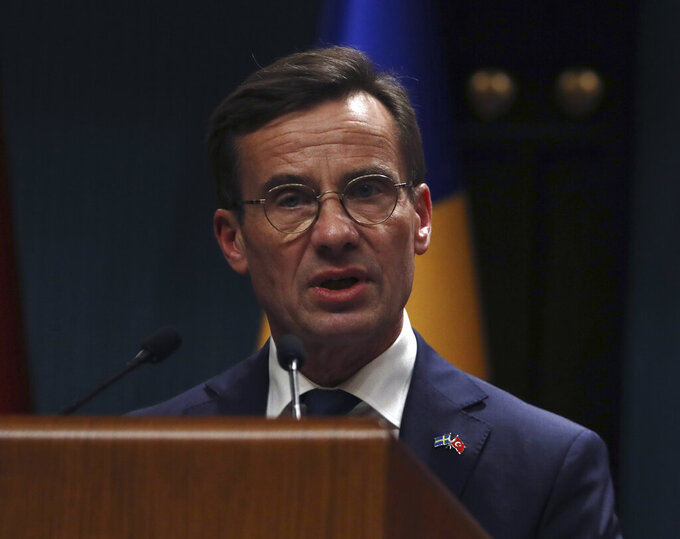 Sweden and Finland abandoned their longstanding policies of military nonalignment and applied for NATO membership this year after Russian forces invaded Ukraine in February, fearing that Russian President Vladimir Putin might target them next.

But Turkey, which joined NATO in 1952, has not yet endorsed their accession, which requires unanimous approval from existing alliance members. The Turkish government has accused Sweden — and to a lesser degree Finland — of ignoring its security concerns.

Turkish President Recep Tayyip Erdogan’s government is pressing the two countries to crack down on individuals it considers terrorists, including supporters of the outlawed Kurdistan Workers’ Party, or PKK, and people the government suspects of orchestrating a failed 2016 coup in Turkey.

“My government was elected just a few weeks ago on a mandate to put law and order first,” Swedish Prime Minister Ulf Kristersson said during a joint news conference with Erdogan. “And this includes countering terrorism and terrorist organizations like the PKK in Sweden.”

“This is why I want to reassure all Turks: Sweden will live up to all the obligations made to Turkey in countering the terrorist threat before becoming a member of NATO and as a future ally,” he said.

Erdogan said he welcomed the new Swedish governments commitment to meeting obligations that were agreed between Turkey, Sweden and Finland ahead of a NATO summit in June but said his country wanted to see “concrete steps.”

“Sweden wants NATO membership for its own security. We want to see a Sweden that supports our security concerns being met,” Erdogan said.

The Turkish leader said at least four individuals wanted by Turkey had been deported, but would not say how many more Ankara wanted. Erdogan said however, that a former journalist wanted for alleged links to the 2016 coup attempt should be extradited.

Earlier, Turkish parliament speaker Mustafa Sentop said Sweden still has “many steps to take” before Turkey's parliament can approve its NATO membership. Sentop claimed that groups that Ankara considers to be terrorists were still able to conduct “propaganda, financing and recruitment activities” in Sweden.

Sweden's new center-right government is taking a harder line not just toward the PKK, but also toward the Syrian Kurdish militia group YPG and its political branch, PYD. Turkey regards the YPG as the Syrian arm of the PKK.

Swedish Foreign Minister Tobias Billström told Swedish Radio there were close links between the PKK and the YPG/PYD, so Sweden would therefore “keep a distance” from Syrian groups in order not to harm relations with Turkey.

Kurds in Sweden were also critical. Kurdo Baksi, a Kurdish writer who has lived in Sweden for decades, called Billström's remarks disrespectful, given the sacrifices that Syrian Kurds made in fighting the Islamic State group.

“We believe that the Swedish government’s bowing to Turkish blackmail contradicts the principles and morals of Swedish society and the humanitarian attitudes that characterized Sweden,” she said.

All 30 NATO member countries must officially ratify the accession protocol for Finland and Sweden to join, but the parliaments of Turkey and Hungary have yet to do so.

Last week, NATO Secretary-General Jens Stoltenberg traveled to Turkey and urged the country to set aside its reservations, insisting the Nordic neighbors had done enough to satisfy Ankara’s concerns.