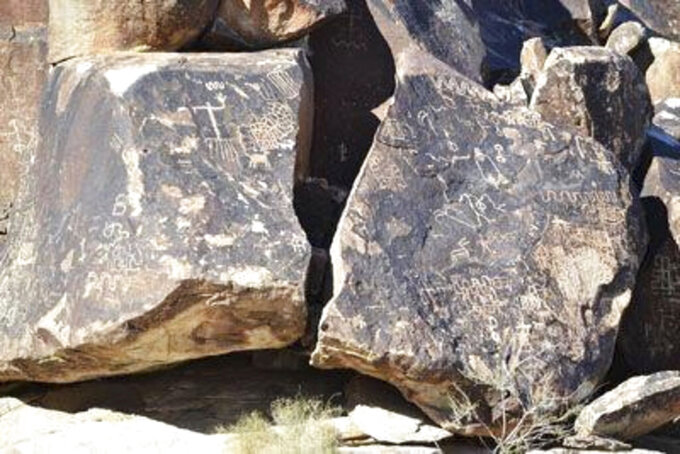 Julie Fairman, ASSOCIATED PRESS
This undated file photo shows the petroglyphs of Grapevine Canyon just outside of Laughlin, Nev., near the Arizona state line. The Fort Mojave Indian Tribe is working to establish the Avi Kwa Ame National Monument to protect thousands of acres of land that include petroglyphs. (Julie Fairman/Mohave Valley Daily News via AP)

MOHAVE VALLEY, Ariz. (AP) — Hidden away in Christmas Tree Pass near the Arizona-Nevada border, more than 700 petroglyphs can be found at Grapevine Canyon.

The petroglyphs, which were carved into the canyon rocks sometime between 1100 and 1900 AD, are a reminder that the history of the Colorado River extends long before Davis Dam made its mark on the landscape.

The Pipa Aha Macav, or “The People By the River,” once occupied lands stretching from Utah to Mexico, and east to west from modern-day Santa Barbara to Prescott.

Now known as the Fort Mojave Indian Tribe, the group’s land was reduced by settlers and now stretches from Mojave City to Topock, and straddles the Nevada, California and Arizona borders.

Fort Mojave was established as a United States military outpost in 1859 to give safe passage to American immigrants.

Ruins of Fort Mojave still exist on a bluff overlooking the Colorado River, just south of the boundary of present-day Bullhead City.

The reservation follows alongside the Colorado River, as the Fort Mojave tribe holds the river sacred to its traditions.

“The whole world was formed here, according to our creation story,” said Nora McDowell, former chairwoman of the Fort Mohave Indian Tribe.

McDowell is the manager of the Topock Remediation Project, which is cleaning chromium contamination in the groundwater near Topock Maze.

The Topock Maze is a more than 600-year-old geoglyph that is spiritually important to the Mojave, as it is a place where spirits transition to their next life.

Also sacred to the Mojave are the Avi Kwa Ame and Avi Vas Qui (Boundary Cone).

According to tribal tradition, the world was created at just below modern day Hoover Dam, at Avi Kwa Ame, the highest point in the Newberry Mountains.

Today, the peak is known as Spirit Mountain.

Many Bullhead City and Mohave Valley locals likely see the words “Avi” and “Spirit Mountain” every day without realizing their significance, as two tribal casinos in the area share the names.

The tribe is working to establish the Avi Kwa Ame National Monument, which will protect 380,000 acres of public land in southern Nevada if the proposal is granted.

“This is our home, and there are a lot of cultural resources we have to look after, even if we no longer own the land,” McDowell said.

On Oct. 11, President Joe Biden officially recognized Indigenous Peoples’ Day to celebrate and honor Native American peoples. It is celebrated on the second Monday of October, falling on the same calendar day as Columbus Day.