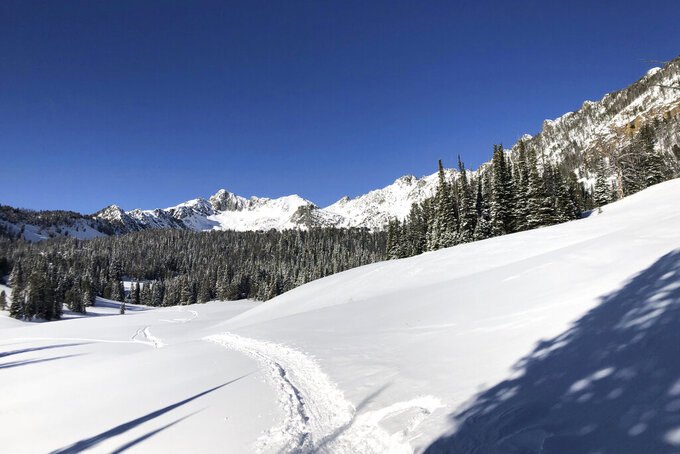 Matthew Brown, ASSOCIATED PRESS
Shown is Lone Peak, which rises above the resort community of Big Sky, Montana, on Jan. 31, 2021. A program in Big Sky that offers cash incentives for homeowners to rent to local workers, rather than offering short-term rentals, is improving the housing availability in Big Sky. In the first three months of the Rent Local program created by the Big Sky Community Housing Trust, it converted 21 homes to long-term rentals and housed 58 local workers. (AP Photo/Matthew Brown)

BOZEMAN, Mont. (AP) — A program in the resort community of Big Sky that offers landlords cash to convert vacation rentals or seasonal homes into long-term homes for locals converted 21 homes and housed 58 locals in its first three months.

After a three-month trial of the Rent Local program, launched by the Big Sky Community Housing Trust, the nonprofit launched the full program on Nov. 1. The success of the pilot program wasn’t a surprise, said executive director Laura Seyfang.

“It’s what we were hoping for,” Seyfang told the Bozeman Daily Chronicle.

The program hopes to convince some 1,200 owners of seasonal homes or vacation rentals to rent to local residents by bridging the gap in money the homeowner might make with short-term rentals.

The housing trust estimated that homeowners make on average anywhere from about $3,800 to about $10,400 more annually on short-term rentals than by renting long-term.

“By providing this boost, it’s enough to make it even out,” Seyfang said. “We’ve put in place all these ways to make it easier for an owner to rent to a local worker, but then there was that cash difference. By making up that income difference it takes away all these excuses.”

Adding the incentive was much more effective in convincing homeowners to rent to locals, according to the nonprofit. The nonprofit estimates it created new inventory 89% faster than through some of its other programs.

One program that offered inexpensive property management services and background checks for renters converted about 14 housing units from vacation rentals to long-term rentals in about one-and-a-half years.

In Big Sky, getting creative to solve a dire housing shortage is necessary. Big Sky needs about 655 more houses by 2023 to address the housing shortfall, according to the nonprofit.

With few local rentals available, about 78% of Big Sky workers commute from about 40 minutes outside of town.

Buying a home in the resort town is largely impossible for local workers, too. The median price for a single-family home in Big Sky is just shy of $2 million while the median price for condos and townhomes neared $1 million, according to data from the Gallatin Association of Realtors.

The average monthly rent in Big Sky is $1,200 per bedroom and there’s virtually no long-term vacancies, according to the nonprofit. The median income for a four-person household was about $88,900.

Since the pilot, a few updates were made, including updating how the incentives are allocated.

Originally, money was awarded based off of length of lease. An updated formula includes length of lease and how many bedrooms the house or apartment has.

From August to October, homeowners who signed leases with locals could get up to $14,500 for a two-year lease.

The new formula means a homeowner could receive incentives ranging from $2,160 for a one-bedroom apartment leased for 6-months to the maximum amount of $17,820 for a two-year lease on a 4-bedroom home.

“That was the major change we made,” Seyfang said.

The program is not a long-term solution, Seyfang said. Several housing projects are in the works in Big Sky to add housing, but may take years to complete.

“Our vision is that we’ll need it (Rent Local Program) for the next two to three years until we can build more housing,” she said.

Keeping up the program is also largely contingent on securing funding.

The program is funded through donations from the Spanish Peaks Community Foundation and other area nonprofits. The organization also plans to again ask for funding from the local resort tax.

One of the housing projects in the works, the RiverView Apartments, was recently awarded nearly $7 million from the Montana Board of Housing.

The Low Income Housing Tax Credit award was just one piece of funding needed for the 100-unit development that will rent exclusively to local workers.

The RiverView project is being developed by the Big Sky Community Housing Trust and the Lone Mountain Land Co., a local developer.

“We were very perseverant and are thrilled we got this money,” Seyfang said. “It keeps our project alive and helps us to move forward.”