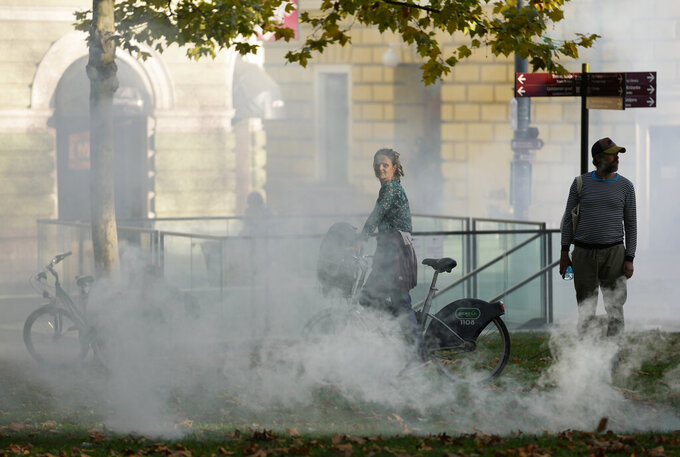 Petr David Josek, ASSOCIATED PRESS
A woman watches as tear gas canisters smoke during a protest against vaccinations and coronavirus measures in Ljubljana, Slovenia, Tuesday, Oct. 5, 2021. EU leaders are meeting Tuesday evening in nearby Kranj, Slovenia, to discuss increasingly tense relations with China and the security implications of the chaotic U.S.-led exit from Afghanistan, before taking part in a summit with Balkans leaders on Wednesday. (AP Photo/Petr David Josek)

Hundreds of protesters showed up to oppose the Slovenian government’s pandemic restrictions, and the confrontation was the third such incident in Ljubljana within a month.

EU leaders have been gathering for a summit with Balkan officials on how to keep engaging with Western Balkans neighbors that hope to join the 27-nation bloc, whose once-successful enlargement policy faces an impasse.

The protest was not directly linked with the EU summit, but protest leaders apparently sought the opportunity to get more media attention from foreign reporters covering the event.

Slovenian police set up checkpoints and limited traffic and movement in Ljubljana and at the venue a few miles away from the capital where Wednesday's summit will take place .

Tensions remained high deep into the evening, with police repeatedly firing tear gas during running battles with soccer hooligans, most of them young.

A leader of the protest has reportedly been detained and police stopped about 30 buses from bringing in the protesters from other Slovenian cities.

Before he was reportedly arrested, protest leader Zoran Stevanovic demanded the suspension of all anti-coronavirus measures, the government's resignation, an early election and "a new electoral system that would not allow rotation of old political zombies.”

Slovenia's right-wing prime minister, Janez Jansa, has been in power off and on since the small Alpine state proclaimed independence from the former Yugoslavia in 1990.

A police helicopter hovered over the capital’s downtown as police fired tear gas and water cannons as protesters tried to march through downtown Ljubljana. Police sirens wailed throughout the city.

Slovenian authorities have introduced tough requirements for the use of COVID-19 passes, including for going to work in all state-run firms. People must show that they are either fully vaccinated or that they have taken an expensive PCR test.

The protesters carried banners reading “Stop Corona Fascism” and demanded equal rights for both those who are vaccinated and those who are not.

Like much of Central and Eastern Europe, Slovenia in recent weeks has seen a rise in new coronavirus infections. The country of 2 million people has fully vaccinated nearly 48% of its population, a smaller share than in many other EU nations.