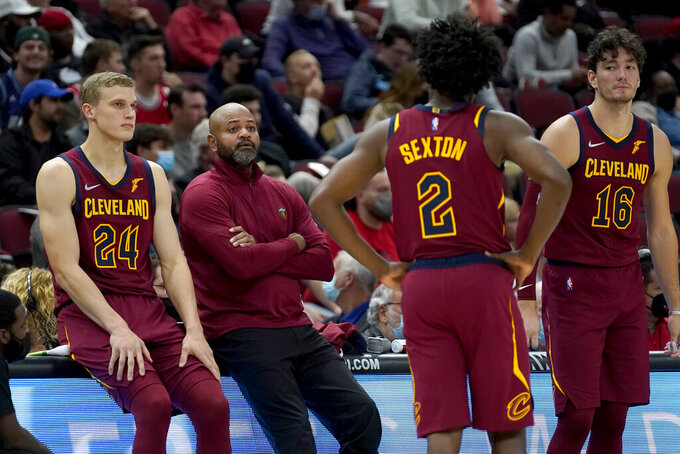 CLEVELAND (AP) — LeBron James hasn't played for the Cavaliers since 2017. His presence remains, taunting the organization as a reminder of its past and current status.

Cleveland's relevancy and run of four straight trips to the NBA Finals disappeared like the drifting dust from one of James' pregame chalk tosses when he left as a free agent for the second time and went to Los Angeles.

The Cavs have lost their standing, reputation and 159 games over the last three seasons since his departure.

“Our guys are fed up,” coach J.B. Bickerstaff said. "They want to win basketball games.”

With one of the league's strongest young nucleuses, and a few savvy veterans thrown into the mix, the Cavs, who are coming off an injury-savaged 22-50 season, will be an interesting team to keep an eye on.

The rebuild from the debris left by James has gone slower than expected, but there's at least reason to believe the worst is behind the Cavs. Their five starters could all be under 23, meaning they'll be energetic and mistake-prone.

Center Jarrett Allen, who at 23 is the veteran among Cleveland's kiddie corps, said his teammates are determined to take a bigger step forward.

“To be honest, the Cavs haven’t been very successful the last couple years,” said Allen, who signed a five-year, $100 million contract this summer. "We don’t know what it takes to be a high-level team. We haven’t really felt what it’s like to win. Our goal is to play meaningful games at the end of the season.

“We want to show people that the Cavs are back.”

Cleveland does have talent, it's just young talent. Guards Darius Garland (17.4 points, 6.1 assists) and Collin Sexton (24.3 points) showed significant development last season, and could be a backcourt for years to come.

Allen will anchor the middle with forwards Isaac Okoro and rookie Evan Mobley, the No. 3 overall pick who is already showing his versatility on both ends of the floor.

Bickerstaff's got proven players on his bench, including newly acquired Lauri Markkanen, five-time All-Star Kevin Love and guard Ricky Rubio, who has played on youthful, developing teams, most recently in Phoenix.

The Cavs also have intriguing lineup combinations and Bickerstaff, who wants his team to play faster and shoot more 3-pointers, is already experimenting with a few to maximize size mismatches.

“Being young is good and bad. It’s good because you have all the energy, you’re hungry, but bad because you’re going to make a lot of mistakes,” he said. "Do we learn from those mistakes quickly or not quickly enough?

"Are we sick of losing or are we just tired of losing? Two different things.”

The 7-foot Mobley has impressed the Cavs with his all-around game.

His length makes him an ideal rim protector and he's shown he might be a better defender than expected. On offense, his ability to beat players off the dribble gives the Cavs another dimension.

During a recent exhibition, Mobley made a behind-the-back dribble in the open floor, something rarely seen by players his size.

“Small guys can’t guard Evan. Most big guys can’t guard him on the perimeter,” Bickerstaff said. “There were moves where he was playing off the catch like a small and getting into the paint. We’ll continue to build that.”

The 32-year-old has reached a crossroads.

Following another injury-shortened season and an unceremonious exit from the U.S. Olympic team this summer, Love has an unclear role or future with Cleveland.

He's not spoken to the team about buying out the final two years of his contract — worth $30 million each season — but things could change if Love is dissatisfied or the Cavs decide it's time to part ways.

“I’m focusing on just being the best version of myself,” he said. “I trust J.B. I was his rookie with the Timberwolves and I know what it takes to get minutes in this league.”

The Cavs seem intent on signing the 22-year-old to a long-term extension. Both sides have expressed optimism about the deal being completed in the near future.

"They love me, my teammates love me, and I love being here.” said Sexton, who has grown into a more vocal leader. On the eve of training camp, it was Sexton who spoke up at a team dinner about accountability.

Rubio fills a critical void from last season as an experienced, dependable backup point guard who could wind up playing starter's minutes.

The Cavs lacked that player a year ago when Matthew Dellavedova's season was ruined by injuries.

Rubio brings leadership as well as a sounding board for Garland and Sexton, who can both benefit from his wisdom.