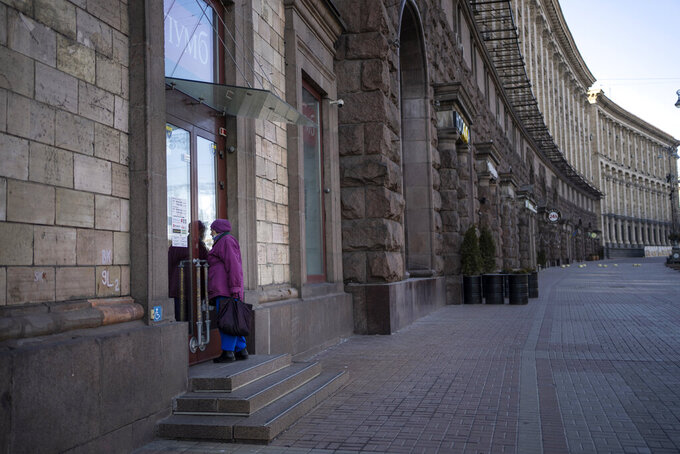 Rodrigo Abd, ASSOCIATED PRESS
FILE - A woman tries to enter a bank that is closed due to the war against Russia, near Maidan Square, in Kyiv, Ukraine, March 18, 2022. Even as Ukraine celebrates recent battlefield victories, its government faces a looming challenge on the financial front: how to pay the enormous cost of the war effort without triggering out-of-control price spikes for ordinary people or piling up debt that could hamper postwar reconstruction. (AP Photo/Rodrigo Abd, File)

FRANKFURT, Germany (AP) — Even as Ukraine celebrates recent battlefield victories, its government faces a looming challenge on the financial front: how to pay the enormous cost of the war effort without triggering out-of-control price spikes for ordinary people or piling up debt that could hamper postwar reconstruction.

The struggle is finding loans or donations to cover a massive budget deficit for next year — and do it without using central bank bailouts that risk wrecking Ukraine's currency, the hryvnia.

Economists working with the government say that if Ukraine can shore up its finances through the end of next year, it is Russia that could find itself in financial trouble if a proposed oil price cap by the U.S., European Union and allies saps Moscow's earnings.

Here are key facts about Ukraine's economic battle against Russia:

HOW HAS UKRAINE BEEN PAYING FOR ITS DEFENSE SO FAR?

In the first days of Russia's invasion, the Ukrainian government turned to foreign help that came at irregular intervals. When it didn't have enough, the central bank bought government bonds using newly printed money. The alternative would have been to stop paying people's pensions and state salaries.

Economists say printing money — while a badly needed stop-gap measure at the time — risks letting inflation get out of control and collapsing the value of the country's currency if it continues.

Ukraine has painful memories of hyperinflation from the early 1990s, economist Nataliia Shapoval said. As a child, she watched her parents use large bundles of bills for everyday purchases as the currency lost value day by day, before being replaced by today's hryvnia.

“Ukraine has been through this, so we know what inflation that is out of control looks like, and we don't want this again,” said Shapoval, vice president for policy research at the Kyiv School of Economics. “The government and the central bank are already on the slippery slope by printing so much.”

Price stability and the ability to pay pensions have enormous impact on ordinary people and society at a time when Russia is trying to demoralize the population by knocking out power and water heading into winter.

With inflation already high at 27%, price hikes have made it hard for lower-income people to afford food.

Bread that used to cost the equivalent of 50 U.S. cents has doubled, said Halyna Morozova, a resident of Kherson, a recently liberated southern city.

“It is very depressing, and we are nervous. We were living on old stocks (of food), but now the light is turned off, the refrigerator doesn’t work and we have to throw away the food," the 80-year-old said recently.

She said the Russians kept paying her Ukrainian pension in rubles but since they started to withdraw in October, she has received nothing. She’s counting on the government to return any pension money that was lost, she said.

Tetiana Vainshtein, also in Kherson, says natural gas is too expensive to keep her home heated. “I am cold. I like warmth, and I’m terribly cold,” the 68-year-old said.

Bank closures during the Russian occupation kept her from getting her pension cash, forcing her to carefully ration every hryvnia for food, she said.

HOW MUCH SUPPORT DOES UKRAINE NEED?

President Volodymyr Zelenskyy says Ukraine needs $38 billion in outright aid from Western allies like the U.S and 27-nation EU, plus $17 billion for a reconstruction fund for war damage.

Economists associated with the Kyiv School of Economics say a lower overall total of $50 billion from donors would be enough to get Ukraine through the year.

Defense spending is six times higher in the 2023 budget recently passed by the Ukrainian parliament compared to last year. Military and security spending will total 43% of the budget, or an enormous 18.2% of annual economic output.

The 2.6 trillion hryvnia budget has a yawning 1.3 trillion hryvnia deficit, meaning the government needs to find $3 billion to $5 billion a month to cover the gap. Recent attacks on energy infrastructure since the budget passed will only increase the financing need because repairs can't wait for postwar reconstruction and will hit this year's budget.

HOW COULD FINANCES AFFECT THE OUTCOME OF THE WAR?

Despite Western sanctions, Russia's economy has fared better than Ukraine's because high oil and natural gas prices have bolstered the Kremlin's budget.

Plans by the EU and allies in the Group of Seven democracies to place a price cap on Russian oil sales aim to change that.

The Kyiv school economists say “by the middle of next year, we believe that the economic situation will shift strongly in Ukraine's favor, making strong partner support particularly important over the period until that point.”

HOW MUCH FINANCING DOES UKRAINE HAVE ALREADY?

The U.S. has been the leading donor, giving $15.2 billion in financial assistance and $52 billion in overall aid, including humanitarian and military assistance, through Oct. 3, according to the latest available data compiled by the Ukraine Support Tracker at the Kiel Institute for the World Economy.

EU institutions and member countries have committed $29.2 billion, though “many of their pledges are arriving in Ukraine with long delays,” said Christoph Trebesch, who heads the tracker team.

The European Commission, the EU's executive arm, has proposed 18 billion euros in no-interest, long-term loans for next year, which still need approval from member governments. The U.S. will likely contribute more as well.

Ukraine, however, is appealing for grants over loans. If all the financing comes as loans, debt would rise to over 100% of annual economic output from around 83% now and 69% before the war. That burden could hold back spending on the war recovery.

The $85 billion in total global assistance to Ukraine, according to the Ukraine Support Tracker, is less than 15% of the support European governments have pledged to shield consumers from high energy costs resulting from Russia's natural gas cutbacks.

To get loans, the commission proposed requiring Ukraine to improve its record on corruption. Since 2014, Ukraine has raised its score on Transparency International's corruption perceptions index from 26 to 32 out of 100 — not great, but improving.

The prospect of EU membership also gives Ukraine incentive to clean up corruption.

COULD THE INTERNATIONAL MONETARY FUND HELP?

The IMF has given Ukraine $1.4 billion in emergency aid and $1.3 billion to cushion the shock from lost food exports.

IMF Managing Director Kristalina Georgieva told The Associated Press that the Washington-based fund is working on more assistance in cooperation with the Group of 7 wealthy democracies, chaired this year by Germany.

“We are on the way to come up with a sound and sizable program for Ukraine," she said, “with the support specifically of the G-7 and the German leadership.”

However, for a larger loan program of $15 billion to $20 billion, it goes against IMF practices to lend money where the debts are not sustainable, and the war raises questions about that. The organization has been reluctant to lend to countries that don’t control their territory, a condition Ukraine does not yet meet.

The IMF “would have to seriously twist its existing framework or change it to provide substantial sums,” said Adnan Mazarei, senior fellow at the Peterson Institute for International Economics and former deputy director of the IMF’s Middle East and Central Asia department.

As a prelude to a possible assistance package, the IMF is holding a four-month period of consultation and enhanced monitoring of Ukrainian economic policies to help Kyiv establish a track record of good practice. That could build confidence for other donors to step in.