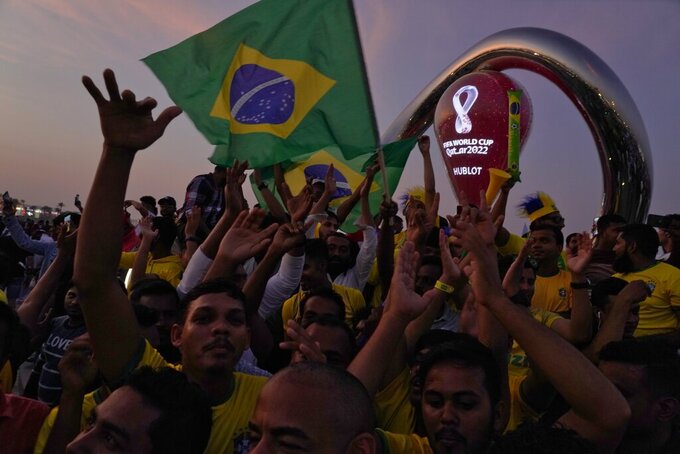 Jon Gambrell, ASSOCIATED PRESS
Fans cheer and wave Brazilian flags in front of the World Cup countdown clock in Doha, Qatar, Friday, Nov. 18, 2022. Fans poured into Qatar on Friday ahead of the Middle East's first World Cup as Doha ordered beers not to be poured out at stadiums during the tournament — a last-minute surprise largely welcomed by the country's conservative Muslims and shrugged off by giddy fans. (AP Photo/Jon Gambrell)

DOHA, Qatar (AP) — Flag-draped fans poured into Qatar on Friday ahead of the Middle East's first World Cup as organizers banned the sale of beer at stadiums — a last-minute decision that stunned FIFA sponsor Budweiser but was largely welcomed by the country's conservative Muslims and shrugged off by some visitors.

This small, energy-rich country, home to some 3 million people and roughly the size of Jamaica, expects another 1.2 million fans to fly in for the tournament that begins on Sunday.

After Friday prayers, the talk of Doha became the sudden ruling by the government to halt all beer sales at stadiums.

Many welcomed the decision in this conservative emirate, which follows the same austere Wahhabi Islam of neighboring Saudi Arabia — despite allowing beers, wine and liquor to be sold at discrete hotel bars in the country. Already, the country's some 300,000 citizens have criticized the Western excesses of some celebrations and vehemently dismissed criticism of its views on LGBTQ rights.

“The whole reason why I came to this country is so that I can enjoy and have the facilities and the advantage of living in a modern economy, but with Islamic heritage,” said Mohammad Ali, a 50-year-old doctor from Sheffield, England, who lives in Qatar. “I wouldn’t want to see that lifestyle compromised.”

“I wouldn’t want with my kids and my family enjoying my time out and being confronted by a drunken — I’m not gonna say a hooligan — but drunken and disorderly fans,” he added.

Alcohol will still be served in hotels, luxury suites and private homes during the tournament. Budweiser continued its work turning a luxury hotel into a massive themed bar. It won't be cheap: a standard bottle of beer went for a little over $15.

In Doha's Souq Waqif market, 35-year-old Pablo Zambrano of Ecuador shrugged off the news of the beer ban ahead of his country's opening night match against Qatar on Sunday. He's staying with his with mother who lives here and said the fridge already is stocked with beer, which foreigners can buy legally in selected depots.

“There's things about the alcohol and the women with the dress codes,” Zambrano said, referring to the country's conservative customs. “It's different. But it's going to be good.”

Zambrano was one of a growing number of fans sightseeing in the traditional market and along the Corniche, a seaside boulevard with views of Doha's glittering skyline.

Just down the street, 24-year-old vegetable seller Ajmal Pial from Khulna, Bangladesh, took in the breeze with the city's skyscrapers stretched out behind him across the waters of the Persian Gulf.

But instead of his nation's green and red disc flag, Pial waved Brazil's over his head as his friend took pictures of him. He and his friends support Argentina and Brazil, two of the tournament favorites.

For Pial and others, the World Cup represents a pinnacle of work in Qatar and likely a final hurrah before heading home as jobs slow. Labor conditions in Qatar, like much of the Gulf Arab states, have been criticized for exploiting the low-paid workers who built this former pearling port into a desert metropolis.

Qatar has overhauled its labor laws, but activists have asked for more to be done. There are no guarantees for freedom of speech in Qatar, but Pial said he felt genuinely happy at the chance to see the tournament.

His friend, 32-year-old Shobuz Sardar, also from Khulna, Bangladesh, said part of that excitement came from the fact that it's only the second time that an Asian country hosts the World Cup, 20 years after Japan and South Korea co-hosted the tournament.

He also hinted at the conditions he and other workers from Asia can face in Qatar.

“You also know that there are too many people all here for work, for jobs,” Sardar said. “They don't have any option for having fun. This World Cup makes them have fun.”

Laborers from the Middle East and Asian nations mixed with fans marching up and down the Corniche. Across government buildings and electronic displays, Qatar's deep purple and white flag with its nine-jagged points seemed to fly nearly everywhere.

For Qatar, coming off a yearslong boycott by four Arab nations over a political dispute, nearly reaching the opening match shows they were able to overcome. U.S. Secretary of State Antony Blinken plans to visit Qatar during the tournament — showing the close relationship America shares with a nation hosting some 8,000 of its troops at its massive Al-Udeid Air Base.

On the Corniche as the sun set and the call to prayers could be heard, crowds gathered around a clock counting down to the opening match.

Qatari fans marched and chanted, waving a banner bearing the face of its ruling emir, Sheikh Tamim bin Hamad Al Thani. That same image of Sheikh Tamim, with the Arabic inscription “Tamim, the Glory,” could be seen everywhere in Doha during the boycott.

Tarek Mujahid, a 37 year old from Alexandria, Egypt, praised Qatar for being the first Arab nation to host the World Cup.