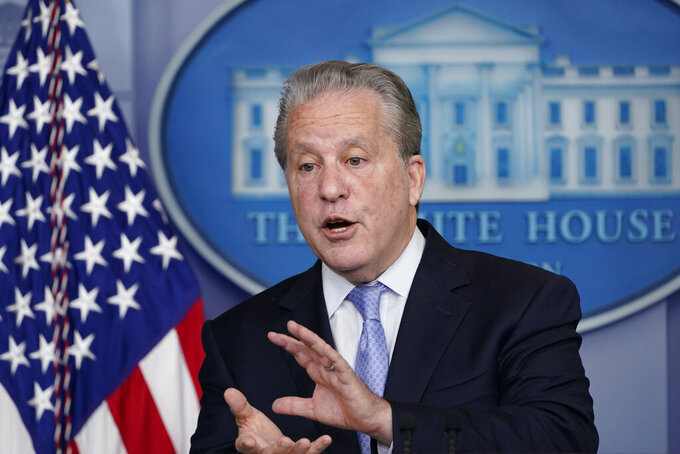 Susan Walsh, ASSOCIATED PRESS
FILE - Gene Sperling, who leads the oversight for distributing funds from President Joe Biden's $1.9 trillion coronavirus rescue package, speaks during the daily briefing at the White House in Washington, on Aug. 2, 2021. The Treasury Department says several states and cities have exhausted their federal rental assistance in a sign that spending on a program aimed at averting evictions has picked up speed. The federal government is forecasting that upwards of $30 billion allocated for rental assistance will be disbursed by the end of the year. (AP Photo/Susan Walsh, File)

PHOENIX (AP) — Eviction filings are creeping up in Arizona, but they are not even close to pre-pandemic levels as agencies do a better job of getting out rental aid, court officials and advocates say.

Scott Davis, spokesman for the Maricopa County Justice Courts, which handle the bulk of Arizona's eviction cases, said the number of lockouts in November actually fell last month, from 4,669 in October to 3,813 in November. That's about two-thirds of the 5,804 eviction cases filed in Arizona's largest county in November 2019 — before the pandemic.

“Still no tsunami,” said Davis, referring to the flood of evictions many people had predicted would be unleashed after the federal moratorium on lockouts ended in late August.

The temporary ban by the Centers for Disease Control and Prevention had been imposed to protect tenants struggling to pay rent amid the economic disruption of the pandemic.

The Pima County Consolidated Justice Court, which includes includes cases in Arizona’s second-largest city Tucson, reported 803 eviction filings in October, up from 485 in October 2020 but still nowhere near the 1,228 reported before the pandemic in October 2019.

An eviction prevention program operated jointly by Tucson and Pima County has been successful in getting out the bulk of the $32 million in federal rental assistance it was allocated and is asking the state for millions more in funds unspent in other parts of Arizona.

After a slow start, emergency rental assistance funds are also getting out faster nationwide.

The U.S. Treasury Department projects that approximately $25-30 billion of two tranches of the emergency aid will be spent or obligated across the country by the end of the year.

Danny Knee, executive director of the Community Investment Corporation, which helps applicants for emergency rental assistance in Tucson, said the number of eviction cases “are thankfully rising a bit slower than we had worried about.”

“The simplest answer for the slower than expected uptick may be that tenants and landlords are thankfully showing trust in our programs and a great deal of patience,” Knee said.