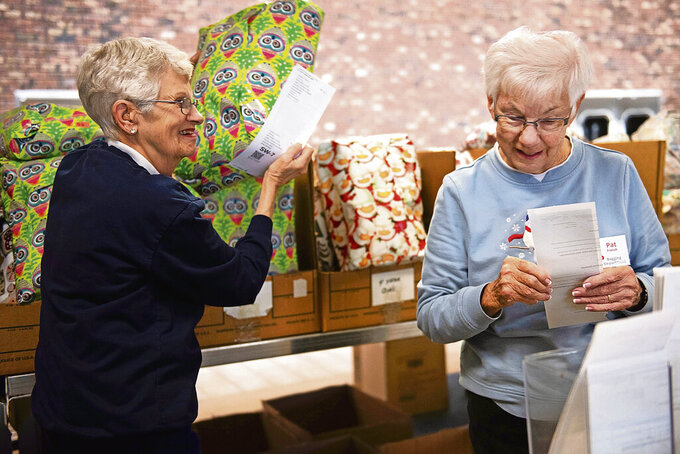 Alyssa Keown, ASSOCIATED PRESS
Santa Claus Girls volunteers Shirley Carlson and Pat French sort presents on Nov. 14, 2018, at Knoll Industries, the nonprofit's former headquarters in Grand Rapids, Mich.. Santa Claus Girls has been providing Christmas gifts to needy Kent County Children for over 100 years. Due to the COVID-19 pandemic, 2020 was a down year. This year, organizers are preparing to give gifts to thousands of children with community support. (Alyssa Keown/The Grand Rapids Press via AP)

GRAND RAPIDS, Mich. (AP) — For more than 100 years, the Santa Claus Girls have been providing gifts to Kent County children who might not otherwise receive anything for Christmas.

The nonprofit postponed its 2020 season due to the coronavirus pandemic. Volunteers are back spreading holiday cheer this season, as it approaches its 113th year of providing toys, books, and clothing to needy children up to age 12, The Grand Rapids Press reports.

In recent years, the all-volunteer organization founded in 1908 by Arianna VanDoorn, has served nearly 13,000 children in the Kent County area. The number served can vary annually depending upon the economy or other factors. This year, officials say they hope to reach 5,000 children.

Nancy Ditta, vice president of Santa Claus Girls vice president, said they recently received a donation from a woman who donates every year to the organization.

“When she was a child, she received a game of Checkers from the Santa Claus girls, and she still has that game today,” Ditta said. “People who have donated or helped us have said that before. It meant so much to them and their family. These stories make it worth it.”

Like many charity-based organizations during the COVID-19 pandemic, Santa Claus Girls has struggled. Santa Claus Girls President Tina Hudson said they lost their home last year. She said they were in a space provided by furniture manufacturer Knoll Inc., at its Kentwood facility for seven years. Knoll, based in Pennsylvania, closed.

“We never had to leave the building, we just had to put stuff away so they could utilize the workspace,” said Hudson, who said Meijer was willing to take its remaining inventory and store it.

This year, a temporary location has been provided in Grandville to transform into Santa’s workshop.

“Up until last year when we couldn’t work, I always would help deliver,” Hudson said. “To see the families, the gratefulness, the tears in their eyes and the excitement the kids have in seeing someone ring their doorbell with a huge garbage bag full of wrapped Christmas presents. It’s heartwarming.”

The process before the pandemic was to individually wrap the gifts and deliver them to each child that was registered.

Now, the gifts won’t be delivered, rather families will pick them up at curbside from volunteers. The gifts will be put into plastic bags without wrapping.

“Usually, we wrap all the gifts, and they’re addressed and delivered personally to homes,” Hudson said. “We don’t have a facility to do that, we only have a facility for four days this year.”

She said gifts must be picked up at the assigned pick-up time once registration is complete. Organizers say the actual location of the temporary facility is only being disclosed to those Kent County families notified they will be receiving gifts.

“We already have 3,400 children registered,” Hudson said. “Registration goes until the first of December, but if we fill up before then, we’ll have to close the registration down.”

The gifts are exclusively for Kent County children from families facing hardship and otherwise wouldn’t receive anything for Christmas. Families can register online-only by completing a general information form, including questions about household size found here.

The deadline for registration is Wednesday, December 1, and the pick-up time is Saturday, Dec. 11 from 8 a.m. to 5 p.m.

Only Santa Claus volunteers will be outside the curbside location and have access to the items. Inside the building, people will be working with papers that have the registration information corresponding to each family, Hudson said.

She said they’ll give the paperwork to the other helpers in the building, walk along and pick up the one-year-old boys’ gift, for example, which includes pajamas, books, toys, hats and mittens. She said the gifts will be placed in a plastic bag and delivered to the family in the parking lot.

This year, the number of volunteers is expected to be lower than in previous years because they don’t have as much space to work out of.

The nonprofit has asked that all volunteers be COVID-19 vaccinated. Volunteers can work as much or as little as wanted from Thursday, Dec. 9 through Sunday, Dec. 12. If interested, organizers says contact Mary Bartling at marybartling@earthlink.net.

Each year, Ditta said the organization works to raise $200,000 as a fundraising goal. She said they’ve met that goal every year except for last year.

“Last year, we did receive some donations, but this year, we’re hoping that we can get the donations to make it,” she said, noting they don’t have any prospects for a new home.

“It’s too important to us to let this organization go away,” Ditta said. “So many people know Santa Claus Girls from the past. They know that every year, their children will get gifts, and we hope it lives on for 113 more years to come.”