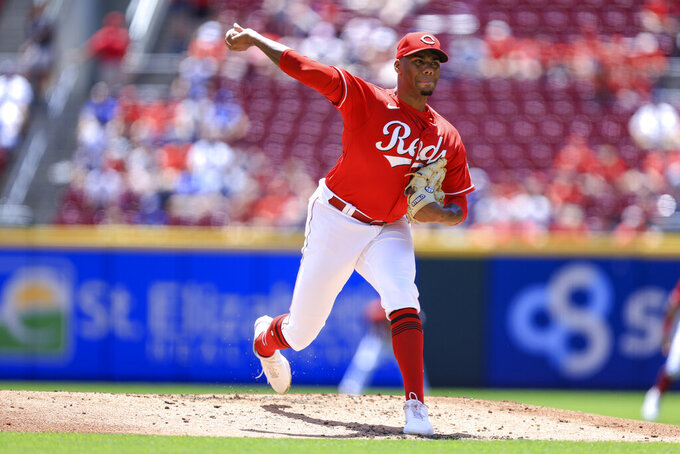 A look at what's happening around the majors on today:

Washington star Juan Soto is being checked out after exiting a game early because of an injured left calf.

The 23-year-old outfielder flexed and pointed to his left leg after making a throw in right in the third inning against Miami. He was taken out after being involved in a rundown in the fourth.

Soto left Nationals Park to get an MRI.

Soto, the face of the franchise, is attempting to sign to a long-term contract. He has 15 home runs and 33 RBIs this season, along with a .382 on-base average and a .449 slugging percentage.

“Oh yeah, it’s terrifying, obviously,” Nationals first baseman Josh Bell said. “Fingers crossed that it’s not anything too, too time-consuming. We’ll see. I know he’s probably going to get the results back here soon. I know we’re all holding our breath for him. I guess time will tell.”

The Nationals get an early start, hosting the Marlins at 11:05 a.m.

The Red Sox will see how shortstop Xander Bogaerts is feeling, a day after he got seven stitches in his left thigh because of a spike wound.

The three-time All-Star left in the second inning with a laceration after the Cubs' Willson Contreras slid into him while caught stealing second at Wrigley Field.

Bogaerts said he didn’t think Contreras meant to harm him, and he didn’t mean to block the base as Contreras was arriving.

“I know he probably didn’t do it on purpose. My foot being in that position, it shouldn’t be there, either," he said.

Way back, it seemed as if every big league team playing a doubleheader on the Fourth of July. It would be Koufax and Drysdale going for the Dodgers or Palmer and McNally for the Orioles or Seaver and Koosman for the Mets.

Well, it's not quite that way anymore.

But, like it or not, the Cleveland Guardians are keeping up the twinbill tradition.

The Guardians will play yet another doubleheader, already their seventh this season and third in six days, when they take on the Tigers at Comerica Park.

The Philadelphia Phillies, meanwhile, are scheduled off on July 4 for the first time since 1916.

Toronto right-hander Alek Manoah (9-2, 2.09 ERA) has a chance to tie Tony Gonsolin of the Los Angeles Dodgers and Justin Verlander of the Houston Astros for the major league lead in wins when he starts for the Blue Jays in the opening game of a trip to Oakland.

Manoah is third in the American League in ERA but he has a 6.55 ERA in two career starts against the Athletics, allowing eight runs in 11 innings.

Cincinnati right-hander Hunter Greene is 0-2 with a 6.33 ERA in four starts since pitching seven shutout innings of one-hit ball to beat Arizona on June 7. He takes his 100 mph heat and a 3-9 record and 5.72 ERA into the series opener at home against Pete Alonso and the NL East-leading Mets.

Greene will be trying to avoid becoming the third pitcher with double-digits losses this year after Washington’s Joan Adon (1-11) and Patrick Corbin (4-10).