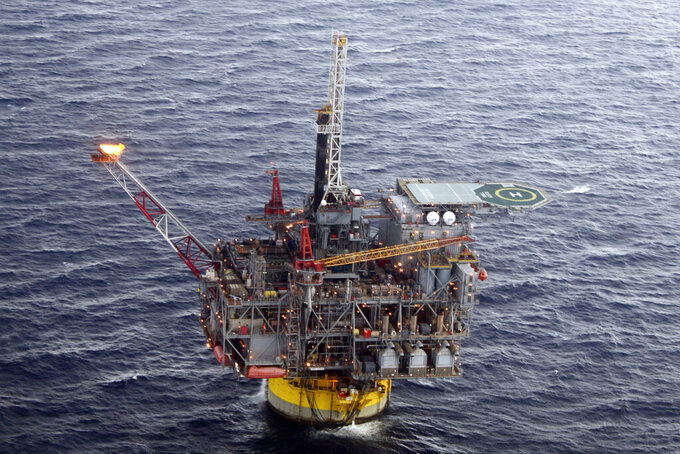 Jon Fahey, ASSOCIATED PRESS
FILE - This Oct. 27, 2011, file photo, shows the Perdido oil platform located about 200 miles south of Galveston, Texas, in the Gulf of Mexico. The U.S. is holding a large oil and gas lease sale in the Gulf of Mexico Wednesday, Nov. 17, 2021, after a federal judge in a lawsuit brought by Republican states rejected a suspension of fossil fuel sales that Biden imposed when he took office. (AP Photo/Jon Fahey, File)

NEW ORLEANS (AP) — The U.S. Interior Department on Wednesday will auction vast oil and gas reserves in the Gulf of Mexico estimated to hold up to 1.1 billion barrels of crude, the first such sale under President Joe Biden and a harbinger of the challenges he faces to reach climate goals that depend on deep cuts in fossil fuel emissions.

The livestreamed sale invited energy companies to bid on drilling leases across some 136,000 square miles (352,000 square kilometers) — about twice the area of Florida.

It will take years to develop the leases before companies start pumping crude. That means they could keep producing long past 2030, when scientists say the world needs to be well on the way to cutting greenhouse gas emissions to avoid catastrophic climate change.

The auction comes after a federal judge in a lawsuit brought by Republican states rejected a suspension of fossil fuel sales that Biden imposed when he first took office.

The Democrat campaigned on promises to curb fossil fuels from public lands and waters, which including coal account for about a quarter of U.S. carbon emissions, according to the U.S. Geological Survey. Yet even as he’s tried to cajole other world leaders into strengthening international efforts against global warming, Wednesday’s sale illustrates Biden's difficulties gaining ground on climate issues at home.

The administration last week proposed another round of oil and gas lease sales in 2022, in Montana, Wyoming, Colorado and other western states. Interior Department officials proceeded despite concluding that burning the fuels could lead to billions of dollars in potential future climate damages.

“We had Trump’s unconstrained approach to oil and gas on federal lands and Biden’s early attempt to pause drilling. Now it looks like the Biden administration is trying to find a new policy,” said researcher Robert Johnston with Columbia University’s Center on Global Energy Policy.

“They’re being very cautious about undermining their fragile momentum” on climate issues, he added.

Environmental reviews of the Gulf of Mexico sale conducted under former President Donald Trump and affirmed under Biden reached an unlikely conclusion: Extracting and burning the fuel would result in fewer greenhouse gases than leaving it in the ground.

Similar claims in two other cases, in Alaska, were rejected by federal courts after challenges from environmentalists. Climate scientist Peter Erickson — whose work was cited by judges in one of the cases — said the Interior Department's analysis had a glaring omission: They left out greenhouse gas increases in foreign countries that would result from having more Gulf oil on the market.

“The math is extremely simple on this kind of stuff," said Erickson, a senior scientist with the Stockholm Environment Institute, a nonprofit research group. “If new leases expand the global oil supply, that has a proportional effect on emissions from burning oil. Therefore, giving out these leases in the Gulf of Mexico would be increasing global emissions.”

The Interior Department’s Bureau of Ocean Energy Management in recent months changed its emissions modeling methods, citing Erickson’s work. But officials said it was too late to use the new approach for Wednesday’s lease sale, which they said had been through "a rigorous process with specific timelines."

"The environmental analysis for Lease Sale 257 was already complete and as such does not contain the newer approach to considering the impacts of foreign consumption of oil and gas,” the agency said in a statement provided to The Associated Press.

Administration officials declined AP's interview requests. For upcoming sales, spokesperson Melissa Schwartz said Interior is conducting a more comprehensive emission review than any prior administration, as it appeals the court order that forced their resumption.

Erik Milito, president of the National Ocean Industries Association said he was uncertain that using the new approach would have changed the government’s conclusions, since drilling for oil in other parts of the world is less efficient and hauling imports also adds to carbon costs. He described the Gulf as the “backbone of U.S. oil production” and said companies consider it a strong investment.

The continued use of the old analysis rankles drilling opponents who say Biden isn't following through on his climate pledges.

“We're talking about transitioning away from a fossil fuel economy and they are selling a giant carbon bomb of a lease sale,” said attorney Drew Caputo with Earthjustice, which has a lawsuit challenging the Gulf lease sale pending in federal court. “That creates a property right to develop those leases. It's a lot harder to keep the carbon in the ground if you sell the lease.”

Some Democrats also objected to the sale. The chairman of the House Natural Resources Committee, Arizona Rep. Raúl Grijalva, said Biden promised to lead on climate issues but continues running a fossil fuel program with a long history of mismanagement.

“The administration needs to do better,” Grijalva said in a statement Tuesday.

The Gulf of Mexico accounts for about 15% of total U.S. crude production and 5% of its natural gas.

Industry analysts had predicted some heightened interest in Wednesday's sale since oil prices rose sharply over the past year. It's also a chance for companies to secure drilling rights before the administration or Congress can increase drilling fees and royalty rates or adopt new restrictions on environmental permits, said analyst Justin Rostant with industry consulting firm Wood Mackenzie.

An outright ban on new leases and drilling seems unlikely after the federal court shot down Biden's temporary suspension, he added.

“Different companies have different approaches and different strategies,” Rostant said. “Some could think this might be the year to go big.”