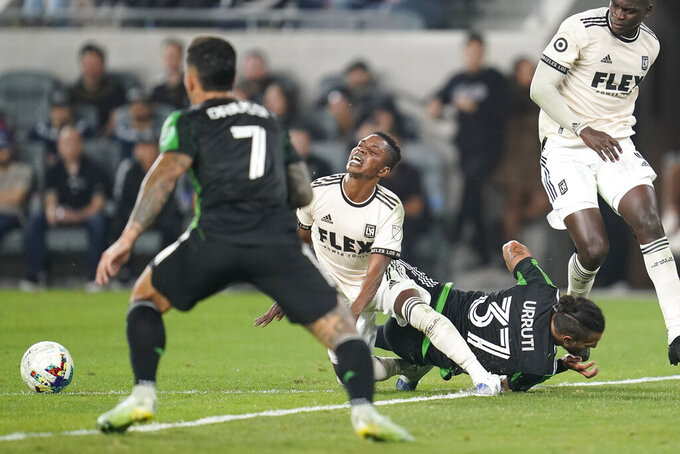 Ashley Landis, ASSOCIATED PRESS
Los Angeles FC forward Latif Blessing (7) reacts as he collides with Austin FC forward Maximiliano Urruti (37) during the first half of an MLS soccer match in Los Angeles, Wednesday, May 18, 2022. Blessing was removed from the game for injury. (AP Photo/Ashley Landis) 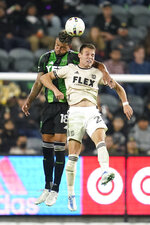 The victory came despite LAFC's Carlos Vela becoming the third-fastest player in MLS history to reach 100 combined goals and assists. Vela scored on a penalty kick in the 86th minute, giving him 62 goals and 38 assists in 98 regular-season matches.

“The important thing is to do the right things for the group. When I score a goal and help the team it feels good,” said Vela, who found the back of the net for the first time in eight games. “In the second half, we had chances but we are missing something. We all have to push more. We have to create more chances and score goals.”

The win is Austin's first in four meetings with LAFC and moved the teams into a tie atop with the Western Conference with 23 points.

Austin FC already has seven victories in its first 12 matches after winning nine all last season.

“I thought it was a difficult match. They created a ton of situations out wide, but we did well dealing with the set pieces," Austin coach Josh Wolff said. "Guys grinded well at the end. We created some clear-cut chances and came away with three points.”

LAFC appeared as if it was going to clear a corner kick attempt in the 13th from Fagúndez, but Diego Palacios was unable to clear it. Palacios' pass was intercepted by Johan Valencia, who passed to Gabrielsen before he was able to fire a right-footed strike from eight yards out into the bottom left corner of the net.

It was Austin's fifth goal in the first 15 minutes of a match this season, which is tied with NYCFC for most in the league.

Fagúndez hit the crossbar in the 23rd minute, but converted in the 80th minute. The midfielder got a great pass from Sebastian Driussi, went on a break up the left side of the field and buried it from 12 yards out to make it 2-0.

Vela cut the margin in half six minutes later when he drew a penalty kick after being fouled by Austin goalie Brad Stuver inside the box. Vela then put in a left-footed shot into the bottom left corner from the spot.

“The learning curve is pretty quick. Guys understand. Hopefully we learn from this and get turned around,” LAFC coach Steve Cherundolo said. “We pushed really hard to get something tangible, it didn’t work out.”

LAFC had an 18-9 advantage in shots and 7-2 in shots on goal, but dropped its second straight. Stuver made six saves for Austin, while Maxime Crepeau had none for LAFC.

“This is a difficult place to get a result. We knew the second half was going to be a grind,” said Stuver, who returned after missing two games due to a deep right knee laceration he suffered during an April 30 match at Houston. “If I make a better play and don't draw a penalty kick maybe we don’t have as much chaos. We did a good job to rally and keep the result.”