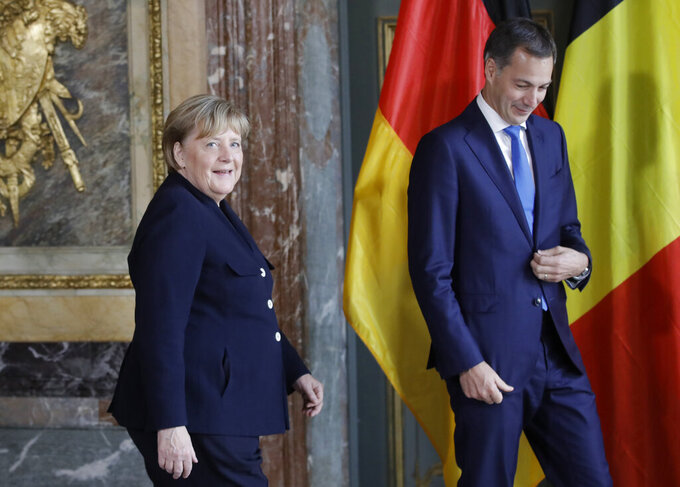 BRUSSELS (AP) — German Chancellor Angela Merkel said Friday that Poland's European Union partners need to step away from confrontation and instead talk to the government in Warsaw to seek solutions to the difficulties in their relationship.

Last week, Poland's Constitutional Tribunal ruled that Polish laws take precedence over those of the 27-nation EU, which Poland joined in 2004. The ruling further escalated lingering tensions over democratic standards between the country’s right-wing nationalist government and Brussels institutions.

Asked during a visit to Brussels whether Europe should quickly take tougher action, Merkel said EU members “have the obligation always to try to find compromises, of course without our giving up our principles.”

“I think it is now time to talk in depth with the Polish government about how we can overcome the difficulties,” Merkel said. She added that it's right from time to time to take cases to the European Court of Justice, but she doesn't believe court proceedings are the only way to resolve “political differences, perhaps also different perceptions of the European Union, how it should work, what the priorities should be."

On Tuesday, both EU Commission President Ursula von der Leyen and Polish Prime Minister Morawiecki will address the issue during a plenary session of the European Parliament in Strasbourg.

Merkel noted that Poland and Hungary have challenged at the EU's top court a system drawn up last year that ties access to some EU funds to a country’s respect for the rule of law. “I think we can wait for this decision by the European Court of Justice,” she said.

“This could become a big issue, but you could prevent it ... if we engage,” Alexander De Croo said. “I think that just criticizing and finger-pointing from the outside is not going to lead us anywhere, so we need to engage and we need to understand what the next steps will be.”

EU leaders will hold a regular summit next Thursday and Friday.