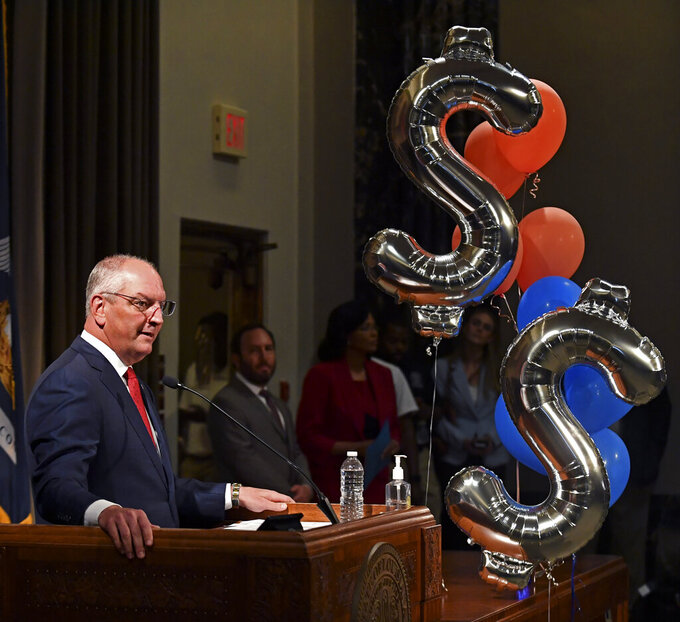 Hilary Scheinuk, ASSOCIATED PRESS
Gov. John Bel Edwards stands near balloons in the shape of dollar signs during a news conference at the Louisiana State Capitol in Baton Rouge, La., on Thursday, June 17, 2021, to announce $2.3 million in cash prizes and scholarships during the "Shot at a Million" campaign to get residents of the state of Louisiana vaccinated against the coronavirus. (Hilary Scheinuk/The Advocate via AP)

BATON ROUGE, La. (AP) — Louisiana will offer residents who have gotten vaccinated against COVID-19 a chance to win a share of $2.3 million in cash prizes and college scholarships, joining the ranks of states hoping financial incentives will persuade those reluctant to get the shots to change their minds.

The top winner could take home $1 million, under the lottery plans announced Thursday by Gov. John Bel Edwards with much fanfare, including a giant fake check and Louisiana-themed music from a New Orleans brass band. Drawings for the 14 winners of cash prizes will take place over five weeks, starting July 14.

The state will give away nine $100,000 scholarships to winners ages 12 to 17 who can prove they've received at least one coronavirus vaccine shot. Four $100,000 cash prizes and one $1 million award will be handed out to winners age 18 and older.

“We need more people to go sleeves up before we can truly end the pandemic," Edwards said. “Shot At A Million is a reward for those who've already gotten vaccinated and a fun nudge for others to get the vaccine sooner rather than later.”

Registration for the federally financed drawings begins Monday at noon and is restricted to Louisiana residents. People can sign up through the state's shotatamillion.com website or by calling 1-877-356-1511 once registration begins.

The Democratic governor hopes cash incentives — such as those offered in California, Colorado, Kentucky, Massachusetts and Ohio — will boost interest in the shots, since the public safety and health protection arguments have failed to sway significant numbers of Louisiana residents.

Louisiana lags nearly every other state in vaccine distribution, despite a widespread grassroots outreach effort that works to bring the shots directly to neighborhoods, churches and homes.

More than 1.7 million people, 37% of Louisiana's total population, have received at least one dose of the vaccine, according to state health department data. More than 1.5 million people have been fully immunized, about 33% of the population.

Only Mississippi and Alabama have lower vaccination rates per capita among states, according to the U.S. Centers for Disease Control and Prevention.

“Every day makes a difference. There are people who are getting sick, going to the hospital and dying because they waited about being vaccinated,” Edwards said.

The governor is particularly hoping to drum up interest among younger people ahead of the fall start of the school year, since Louisiana has seen limited embrace of the vaccines from college-aged students and teenagers.

For Louisiana's new cash incentive program, anyone who has been immunized since the coronavirus vaccines became available is eligible to register for the weekly drawings. For those newly getting immunized, they have to show proof of one shot of a vaccine that can require two doses.

A person only needs to sign up once to be entered into all five weeks of drawings, which will be handled by the Louisiana Lottery Corporation and paid with federal coronavirus relief aid.

While the first drawing will be held July 14, the winner won't be announced until two days later — after vaccine status and residency are confirmed, according to the governor's office. The same schedule will be followed each week after that.