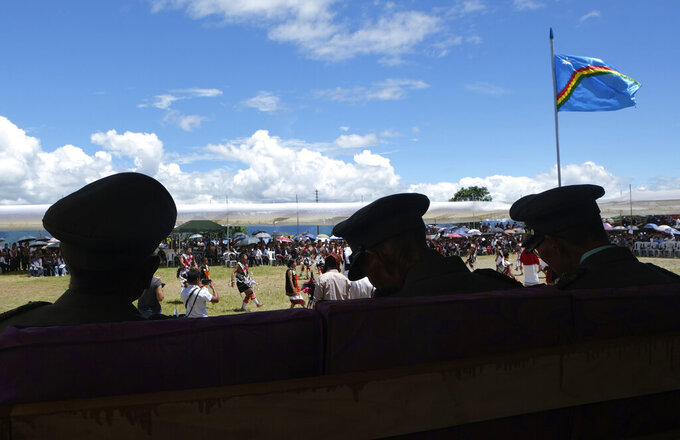 Yirmiyan Arthur, ASSOCIATED PRESS
Naga Army officers watch celebrations marking their Declaration of Independence in Chedema, in the northeastern Indian state of Nagaland, Sunday, Aug. 14, 2022. The Nagas - an indigenous people inhabiting several northeastern Indian states and across the border in Myanmar - marked the 75th anniversary of their declaration of independence on Sunday. (AP Photo/Yirmiyan Arthur)

CHEDEMA, India (AP) — In a small mountain village in India’s northeast, blue flags fluttered high in the clear sky. While Indians across the country prepared to celebrate 75 years of independence from British rule on Monday, the Naga community in Chedema marked the occasion by hoisting their very own blue flag.

The Nagas — an Indigenous people inhabiting several northeastern Indian states and areas across the border in Myanmar — marked the 75th anniversary of their declaration of independence Sunday. Seeking self-rule, Nagas had announced independence a day ahead of India in 1947 and commemorate this moment every year.

The Naga insurgency is the longest running in South Asia. But the largest Naga armed faction, the National Socialist Council of Nagaland (Isak-Muivah), has been in a cease-fire with the Indian government for 25 years as peace talks have come to a deadlock over the issue of using the Naga flag and constitution.

Thousands gathered Sunday at the event organized by the Naga National Council, the community’s parent political organization. Infants slept on the backs of their mothers while young boys and girls helped prepare the feast that followed the hoisting of the blue Naga flag. About a hundred veteran fighters, who laid down their arms after the first cease-fire in 1964, attended the event in their uniforms.

Riivosielie Chakriinuo, the oldest surviving general in the Naga Army, wore a medal for his service and smiled as he recalled the 1964 cease-fire, saying it brought peace to the land.

Vilazoü Suokhrie, 87, said she was overjoyed to see so many people gathered to mark the Naga community’s declaration of independence.

While the declaration has never been contested by India, Nagaland and other northeastern states remain part of the country despite years of insurgency efforts seeking self-rule. The Nagas preserve their identity and history through the annual event.

“When the British were leaving, we expressed our desire to be a free people,” said Adinno Phizo, 90, who is president of the NNC.

Over 90% of Nagaland state’s more than 1.9 million people are Christian — a striking contrast in a Hindu-majority country. For decades, Nagas have fought a battle for independence from India, and there are few families that have not suffered from the violence.

In recent years, the violence has ebbed but the demands for political rights have grown even as the federal government has pushed for talks with separatists.