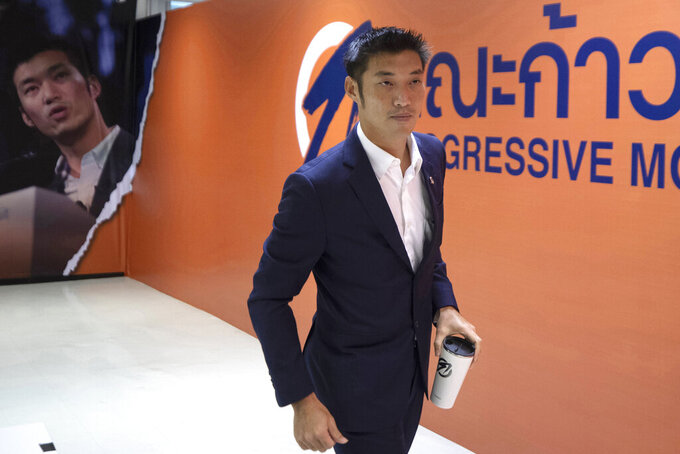 Sakchai Lalit, ASSOCIATED PRESS
FILE - Former leader of the disbanded Future Forward party Thanathorn Juangroongruangkit leaves a press conference in Bangkok, Thailand on Jan. 21, 2021. Thanathorn has vowed to continue his activities without fear, even though he faces a possible 20 years in prison after being indicted Monday, April 11, 2022, on charges that he insulted the king and violated a law on online activity. (AP Photo/Sakchai Lalit, File)

BANGKOK (AP) — A popular leader of Thailand’s progressive political movement has vowed to continue his activities despite being indicted on charges of defaming the king and violating a law on online activity which carry penalties of up to 20 years in prison.

Thanathorn Juangroongruangkit, a co-founder of the court-disbanded Future Forward Party, was indicted Monday for comments he made in January last year about the awarding of a government COVID-19 vaccine production contract to a company owned by King Maha Vajiralongkorn. His comments were part of a general criticism that the government of Prime Minister Prayuth Chan-ocha bungled its vaccination campaign by failing to ensure timely, adequate and effective supplies.

Thaland’s lese majeste law, Article 112 of the Criminal Code, carries a prison term of up to 15 years for insulting the monarchy, but critics say it is often wielded as a tool to quash political dissent. The charge of breaching the computer crime act is punishable by five years. His comments last year were made during a Facebook Live session.

“I am not the first and will not be the last silenced by Article 112 despite the fact that my criticisms are for the benefit of the public, stemming from concerns that Thai people will not receive vaccines fast enough or will receive inefficient vaccines," Thanathorn said on his Facebook page after his indictment.

“By using the 112 charge against me and other political activists, those in power hope that it will be the ultimate weapon to silence us, to stop us from questioning, demanding justice and a better society. I would like to confirm here that I will continue my work for the public interest. I will not be afraid to speak out or do anything that is necessary and beneficial to the country," he said.

The Future Forward Party made a strong third-place showing in the 2019 general election just a year after it was established. The party was especially critical of the military, a pillar of the country’s establishment with major influence over the government.

Thanathorn was forced out of Parliament in 2020 when a court ruled that he had broken an election law by previously owning shares in a media company, and his party was later dissolved on a similar technicality. He has faced a number of legal cases that supporters charge are without merit and are meant to stop his criticism of the government. Since leaving electoral politics he has been a leader of an organization pushing a progressive agenda, including curbing the military’s role in politics and promoting democracy at the grassroots level.

The army staged coups in 2006 and 2014. Prime Minister Prayuth, then army commander, led the latter takeover and continued in office after the 2019 polls, which critics say were arranged to give the military-backed party an advantage.

“Thanathorn’s criticism is toward the government's policy, and there is no content that defames the (royal) institution. But like other cases, it’s a tool to silence critics,“ his lawyer, Krisadang Nutcharas, said Tuesday. "This actually tarnishes the reputation of the monarchy rather than protects it.”