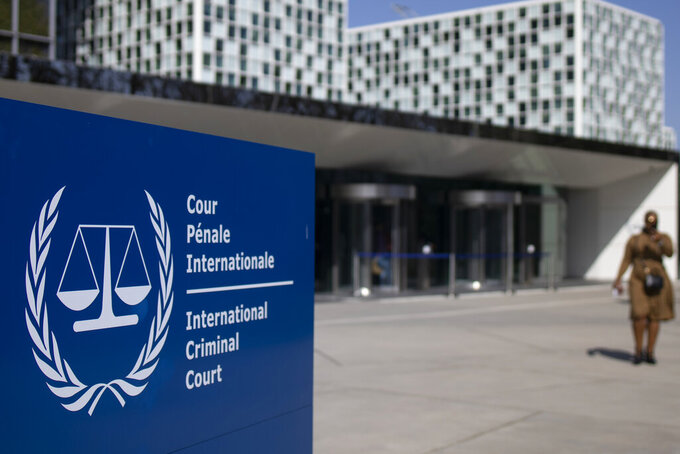 Peter Dejong, ASSOCIATED PRESS
FILE - A view of the exterior view of the International Criminal Court in The Hague, Netherlands, on March 31, 2021. The International Criminal Court unsealed an arrest warrant Thursday July 28, 2022 for a former government minister in Central African Republic for crimes against humanity and war crimes allegedly committed during hostilities in the country in 2013. (AP Photo/Peter Dejong, File)

THE HAGUE, Netherlands (AP) — The International Criminal Court unsealed an arrest warrant Thursday for a former government minister in Central African Republic for crimes against humanity and war crimes allegedly committed during sectarian hostilities in 2013.

Prosecutors at the global court accused Mahamat Nouradine Adam of crimes including torture, persecution, enforced disappearances and cruel treatment at two detention centers in the capital, Bangui. The warrant was first issued under seal in January 2019.

A judge who reviewed evidence prosecutors submitted to support their request for an arrest warrant wrote that it was “sufficient to establish reasonable grounds to believe that Adam bears individual criminal responsibility for the crimes” listed in his warrant.

Mainly Christian militias known as anti-Balaka later fought back, targeting civilians and sending most of the Muslim residents of the capital, Bangui, fleeing in fear.

Fighting between the two groups left thousands dead and displaced hundreds of thousands in 2013 and 2014.

Prosecutors alleged that at the time the Muslim group overran Bangui in 2013, Adam was “considered as the person with the most power in the Seleka, even more influential than Michel Djotodia,” who was named president to replace Bozize.

The court said in its warrant that the United Nations imposed a travel ban on Adam, but he “still seems to be moving uninhibitedly in several countries within the region.” He also is on a U.N. sanctions list for “engaging in or providing support for acts that undermine the peace, stability or security of the CAR,” the court said.

Two alleged anti-Balaka commanders, Alfred Yekatom and Patrice-Edouard Ngaïssona, are already on trial at the ICC; another was surrendered to the court earlier this year.

An alleged Seleka commander, Mahamat Said Abdel Kani, was handed to the court last year. His trial is scheduled to open in September.