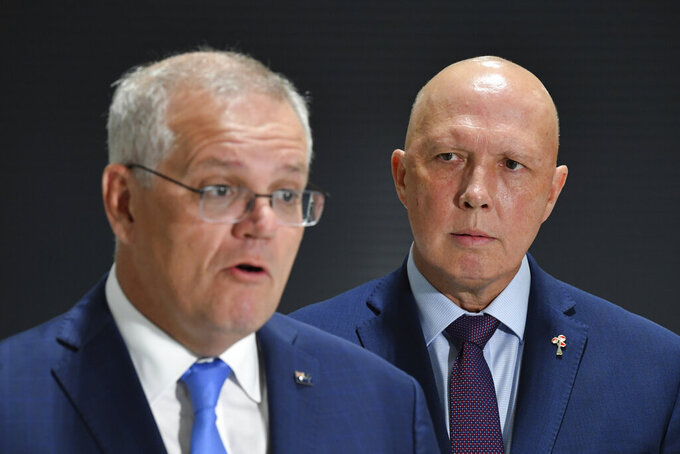 Mick Tsikas, ASSOCIATED PRESS
Australia Defense Minister Peter Dutton, right, watches as Prime Minster Scott Morrison speaks at a press conference after visiting TAE Aerospace near Ipswich, east of Brisbane, on April 22, 2022. Dutton said Thursday, May 5, 2022, there is evidence that the Chinese Communist Party wants Australia's government to change at the May 21 election because a center-left Labor Party administration would attempt to appease Beijing. (Mick Tsikas/AAP Image via AP)

CANBERRA, Australia (AP) — Australia's defense policy debate heated up when the defense minister said there was evidence that the Chinese Communist Party wanted Australia’s government to change at the May 21 election because a center-left Labor Party administration would attempt to appease Beijing.

Defense Minister Peter Dutton said Thursday the evidence included communication on the Chinese social media platform WeChat and how editors of Chinese-language newspapers in Australia had been pressured.

There were also “other elements, obviously, that I can’t go into publicly,” Dutton said in an apparent reference to classified security briefings.

Dutton made his allegation of a Chinese preference for Labor in answer to a reporter’s question during a defense policy debate at the National Press Club with opposition defense spokesperson Brendan O’Connor.

“There’s no doubt in my mind that the Chinese Communist Party would like to see a change of government at the May 21 election. No question at all,” Dutton said.

O’Connor said he did not agree with what he described as Dutton’s “conspiracy theory.”

“It’s not in this country’s interest for a political party to attack the other major political party on the basis of appeasing China — particularly when it’s untrue,” O’Connor said.

The Chinese Embassy in Canberra did not immediately respond to a request for comment Thursday.

A year after the conservative government was first elected in 2013, Chinese President Xi Jinping visited Australia and addressed Parliament. Bilateral relations have dramatically soured since then. Chinese government ministers won’t talk to their Australian counterparts and China has imposed a series of formal and informal trade sanctions on Australian exports.

Dutton said Sen. Penny Wong, who would become Labor’s foreign minister, would want to wind back the past nine years of Australia’s conservative government actions toward China.

“Penny Wong believes that she can go to Beijing on a charm offensive and she could change the direction of China under President Xi," Dutton said.

Prime Minister Scott Morrison’s conservative Liberal Party-led coalition has been campaigning as lawmakers most likely to stand up against Chinese coercion.

A conservative lobby group Advance Australia has been displaying ads on the sides of trucks that depict Xi casting a vote for Labor.

“That is not in the national interest. That only serves the interests of one country and that is China,” Richardson added.