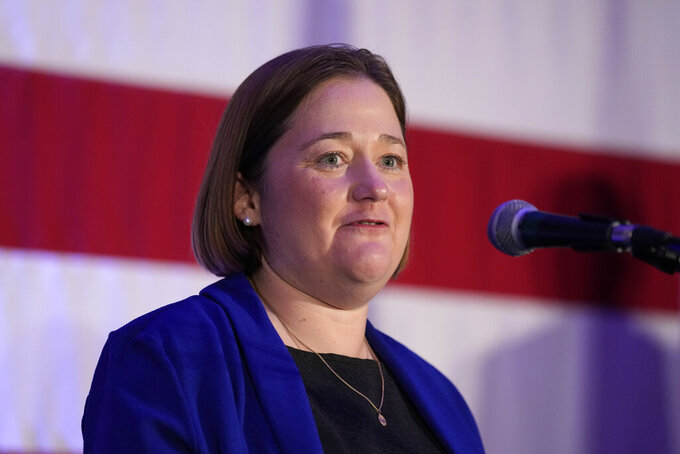 DES MOINES, Iowa (AP) — Republicans strengthened their hold over Iowa politics in Tuesday's election by maintaining big majorities in the legislature and winning races for statewide offices, including attorney general and treasurer.

As expected, Gov. Kim Reynolds was reelected by a wide margin, but Republican candidates for other statewide offices also performed well, including in races for attorney general and treasurer. Democrats had held those offices for decades and usually were elected by wide margins.

Vote counting was continuing in some counties, so final counts could change slightly.

Republican lawyer Brenna Bird will be Iowa's next attorney general after she beat Democrat Tom Miller. He was the nation’s longest-serving state attorney general, having held the office since 1978 except for a four-year break beginning in 1990 when he unsuccessfully ran for governor. He returned in 1994 and had remained since.

“It's a great job, a great office," Miller said Tuesday night. “You can use the law to serve the interests of ordinary Iowans and you can be an independent attorney general.”

Reynolds had been a strong supporter of Bird, saying she wanted “my own" attorney general.

Miller declined to represent Reynolds in abortion cases and has disagreed with other Reynolds policy choices. Miller also joined other attorneys general in challenging former President Donald Trump on immigration policy and other issues, which angered Iowa Republicans who approved a law stripping his office of many of its powers. Reynolds agreed to veto the law if Miller promised not to join such multi-state lawsuits without her approval.

Bird served as a staff lawyer for Reynolds’ predecessor, former Gov. Terry Branstad, and was chief of staff for former U.S. Rep. Steve King, a former western Iowa congressman who was sidelined by his own party for racist comments and then defeated in a primary in 2020.

In her victory speech, Bird credited her win to support from numerous law enforcement officers and agencies.

“We back the blue here in Iowa don’t we?” Bird said. “And tonight our success was due to the law enforcement support that we had.”

Smith, was best known for his efforts in recent years to help write legislation to tighten voting laws in the state, including reducing the early voting period and cutting the times polls are open on Election Day.

Democrats have argued that Iowa has no history of voting fraud and that the laws make it harder for people to vote. Republicans say the tougher rules will guard against fraud and are needed to restore trust in the election system.

Democratic State Auditor Rob Sand was narrowly leading Republican Todd Halbur in his effort to serve a second term. The Associated Press has not called a winner in the race.

Votes were still being counted after Pate told election officials in Des Moines and Warren counties to call an emergency meeting with their county supervisors to begin administrative recounts of precincts that had not fully reported results. Pate's office declined to give details about the reason for the recount.

“The secretary of state’s office is still investigating what happened. When that information is complete we will release our findings,” said spokesman Kevin Hall.

In the Legislature, it appears Republicans may pick up a few seats to expand their 60-40 margin over Democrats in the House.

In the 50-seat Iowa Senate, Republicans expanded their majority to 34 seats, giving the GOP a supermajority. That will enable Republicans to confirm Reynolds' appointments to state agencies, boards and commissions without Democratic interference. The last time Republicans held more than 34 seats was 1973.

Tuesday's election had the state's second-highest midterm election turnout, with more than 1.22 million voters. It trailed only the 2018, when about 1.3 million people voted.