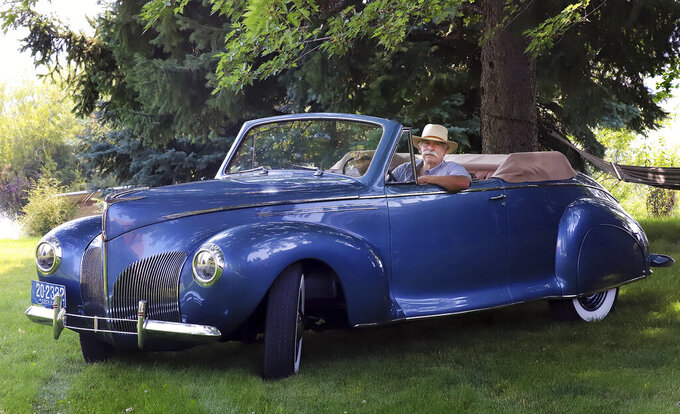 Perry Backus, ASSOCIATED PRESS
In this July 30, 2021, photo Dennis Moore, of Hamilton, Mont., sits in his 1940 Lincoln Zephyr that was used by the Glacier Transportation Company in the 1940s to transport dignitaries through the scenic Glacier National Park. Moore bought the car at an estate auction in Oct. 2018, restored it and it drove it this week to California for a classic car show in Pebble Beach. (Perry Backus/Ravalli Republic via AP)

The 1940 Lincoln Zephyr convertible that transported dignitaries for Glacier Transportation Company on scenic drives through the national park had been hidden away in a Helena garage since 1960.

The man who had purchased it had planned to restore the car to its formal glory, but never got around to it. His daughter told Moore that its main use had been the place where Christmas presents were hidden each year.

Moore purchased the car at an estate sale in October 2018 with the idea that he would complete what its former owner had hoped to accomplish.

This week, he and his son, Matthew, drove the car 1,400 miles to take part in the prestigious 70th annual Concours d’Elegance car show in Pebble Beach, California.

“It was in excellent shape for an 80-year-old car,” Moore told the Ravalli Republic. “The auctioneer told me the only thing it didn’t have was an air cleaner.”

Last year, when so many people decided to take up a project during the heart of the pandemic, Moore decided his would be something that he could be quite sure no one else on the planet was doing.

Most known for its Red Jammers that packed tourists up and over the Going-to-the-Sun Road, the Glacier Transportation Company owned one Lincoln Zephyr.

Lincoln first introduced the model named after the Greek god of the west wind in 1935. With its prow-like front grille, low-raked windscreen, integrated fenders and streamline aerodynamic design, the model helped to reignite sales in the late 1930s.

“I had to make a decision after I purchased it,” Moore said. “Would I let it fall into the survivor category and keep it as was or would I do some restoration?”

Fortunately, the upholstery had been protected and looked almost brand new. Moore decided to have it painted and its V12 engine gone through. The biggest challenge turned out to be the electrical work needed to turn the parking lights into turn signals.

“I knew that I was going to drive it to California,” he said. “I think 95 percent of the population doesn’t know what it means when you stick your arm out the window to do a hand signal.”

The car had been through three engines.

“The original V12s weren’t the greatest motors in the world,” Moore said.

The owners originally replaced the engine with a V8 in the late 1940s and opted to go back to a V12 in the mid-1950s. Moore learned a lot about his Lincoln after hearing about a Canadian author who is writing a book on the old Red Jammers.

When Moore caught up with him on the telephone, the man told him he knew everything there was to know about the car.

“He told me what its serial number was,” Moore said. “He had all the history, even down to when its oil had been changed. He told me it was used to transport special guests around Glacier Park. The dignitaries would sit in the back seat and enjoy the view.”

Moore hopes to find photos of the car while it was in use in Glacier National Park.

It’s been a labor of love to bring it back to its glory.

“The motor was in good shape,” he said. “We took it down the block. It was kind of unique in that a lot of things in the car ran off a vacuum. Its rear end is a three-speed transmission with six forward speeds that work off a vacuum. And, of course, the windshield wipers do too.”

Much of the road trip to California this week was made with a convoy of 15 vintage vehicles headed for the car show. Included in that group was a one-of-a-kind Ferrari worth an estimated $15 million and a 1910 Peerless that had to drop out due to motor troubles.

“We get a lot of comments wherever we stop,” Moore said. “I’m sure we’ll get a lot of them when we drive the 17-mile loop around Pebble Beach. There will be literally thousands of people along the drive. This is the biggest car show in the United States and most prestigious.”

Overall, Moore said the trip has been quite an adventure.

“It could be a little stressful,” he said. “The car has run well, but it’s a little weak on power … Some of the roads are kind of tortuous, especially those cliffs along Highway 1. You have to take a run at some of those hills. It definitely keeps you on your toes.”